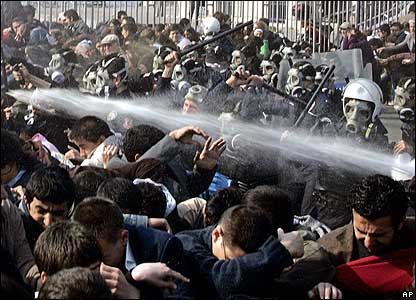 Had Pacman been in the entourage, no doubt the hoses come out

First, no, Pacman was not involved. Reports have this “near riot” taking place at a House of Blues, so I’m pretty sure Pacman would mistake it for a Blue Man Group performance and never step foot there.

What did go down, however, was Buffalo Bills player Donte Whitner disorderly conducting the shit out of himself amongst the presence of sworn officers.

As off-duty officers tried to restore order, Whitner aggressively forced his way into an area where he was told not to go.

Not shocked at all by that development.

“Whitner began swinging his arms in a violent manner and, when restrained by officers, he broke free and took a fighting stance,”

Hell yes he did.

The report did not indicate whether he yelled variations of the phrases, “come on, motherfuckers,” or “do you know who I am?” but, I think that is assumed when you have a police report about an incident involving star athletes. If he did not, I am sure teammate Ko Simpson (“I am worth millions!” he yelled when police persecuted him this past New Year’s) will write up a memo to make sure next time he lets officers know who he plays for and his rough net worth.

And, oh yeah, he found himself tasered for his troubles.