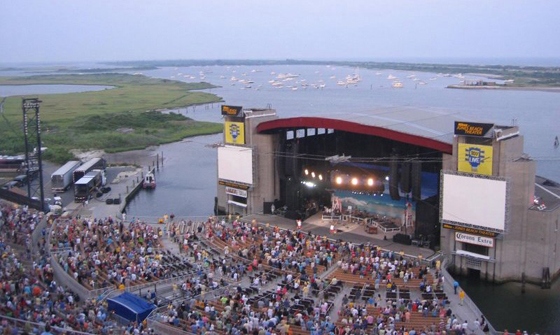 So I realize the odds of anyone not having seen this yet today are slim but fuck you guys.  Some of us have jobs.  Below is the Jimmy Fallon video from last night when he sang “Whip My Hair” while imitating Neil Young.  And he sang it dead straight and it was really funny.  And when Bruce Springsteen comes out in a ridiculous Jaoquin Phoenix fake beard and mustache and joins in it becomes gold.

Which brings me to Jones Beach.

I was showing the video to someone today and they said:

Bruce Springsteen came out and sang Rockin’ in the Free World with Neil Young one night at Jones Beach.

And I had forgotten that Jones Beach even existed.  It’s a New York thing.  Or I guess a Long Island thing?  It’s on the South Shore (the pic is above), seats about 15k people and tends to feature acts that are no longer Madison Square Garden worthy but also not State Fair Material (yet).  Check out their shows from this past summer.  So it’s the kind of place where you can sit outside in good weather and hear songs you know and get surprised.

The surprises come in the form of Billy Joel showing up a few times a summer cause he’s around and playing with whoever’s there.  It’s about the fact that the place is outside NYC and it’s legendary and if you go long enough you’ll see Ringo Starr show up and play drums for Jimmy Buffet or some shit.  It’s the kind of place where stuff in the video below really happens and I guess it IS a New York thing.  But the Lincoln Memorial is a Washington thing and people make special trips just for that.  So maybe, if you like music a lot, and over the hill bands in particular, you might wanna make a pilgrimage.  Who knows, maybe Bon Jovi will show up and sing with Chubby Checker…