I Do Not Kill With My Gun – The Dark Tower Movie

It’s finally here. The long-awaited film adaptation of Stephen King’s epic 8-book magnum opus, “The Dark Tower”. It took a long time and, let’s be honest, Hollywood has not been particularly kind or true to Stephen King’s novels in the past. However, with Idris Elba and Matthew McConaughey cast as Roland and The Man in Black, I found a glimmer of hope that this film would do the story and the characters justice. The trailer did not disappoint. Rather, it made me that much more excited.


There’s been a lot of grumbling from fans of the books that the film doesn’t seem to follow the story progression in the novels. This was particularly worrying when Roland (The Gunslinger), Jake and Sayre were cast, but not Eddie Dean or Susannah/Detta Holmes. However, in the last book, we learn that Roland’s journey is a cycle he’s traveled over and over, countless times. Stephen King even tweeted out this image in May to tease the movie.

The Dark Tower is close, now. The Crimson King awaits. Soon Roland will raise the Horn of Eld. And blow. pic.twitter.com/rqGSKM3dWL

In the first novel, Roland had abandoned the Horn of Eld on a battlefield years before the book begins. We later learn that if he had kept hold of the Horn, his journey might have been different. What Stephen King is hinting at, is that in this film, in this CYCLE, Roland kept the Horn, which changes the progression of events from what we’re familiar with.

That aside, the trailer looks fantastic. I loved seeing the visualization of Mid-World and there are interesting little extras peppered through it for fans of King’s work to find and squee over.

In the psychiatrist’s office, we get a quick glimpse of a framed photo of an old hotel that looks suspiciously like the Overlook Hotel from ‘The Shining’. 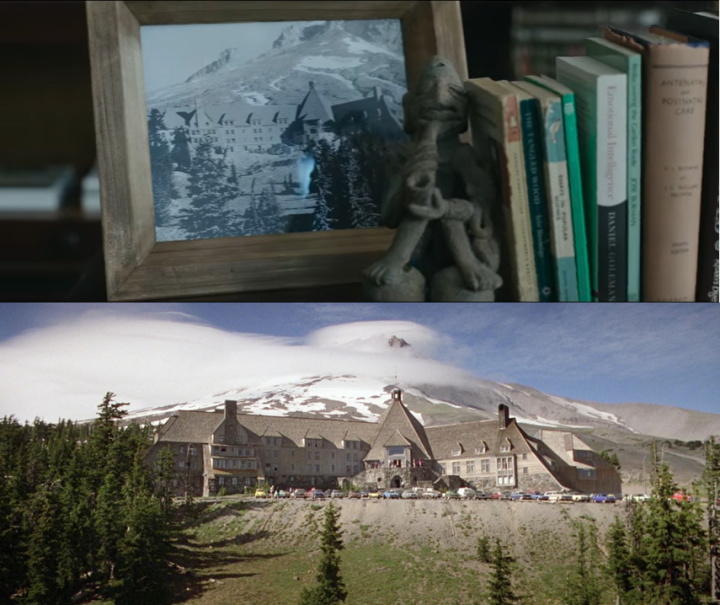 Later, we see Jake walking in some woods and looking at a ruin of a carnival entrance, with broken balloon statues and a broken lighted sign that reads “Pennywise”.

Near the end of the trailer, we see Jake get grabbed in a ramshackle settlement by some fairly nasty-looking characters. Could this be the city of Lud??

And can we take a moment to appreciate 1) the insanely fast and smooth loading of Roland’s gun, and 2) the epic shot he makes at the end of the trailer?

So many really fun things to think about with this trailer! I’m definitely looking forward to seeing the full movie.