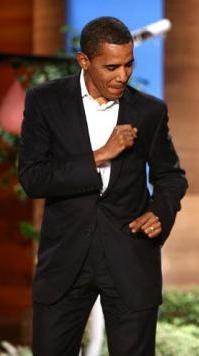 So, a couple nights ago, everyone was showing an Obama press conference. Except for FOX, they aired “So you think you can dance”…and they whipped Obama’s ass.

Fox benefited from declining to air President Barack Obama’s news conference Wednesday night, with “So You Think You Can Dance” rising to top the night in the adults 18-49 demographic.

I guess if you add up all the channels showing Obama, I’m sure the dude probably did okay. But, still, I think we can safely say the nation likes to dance more than we like Obama. RIGHT?

Seriously, though, I don’t get why more stations don’t do this. Like, had ABC shown two episodes of Better off Ted, they’d probably do great and bring in new viewers. Aren’t people dying to get other normal programming rather than a Presidential news conference or is that just me?