So there is a new writer.  Christy Ramsey.  You can call her Cramsey.  Or Crammer.  Or Christy I guess.  She has her own site but as part of her plea bargain she has to write here, too.  Her site is TGNP.me which stands for something but I don’t remember what it is.  I’m pretty self-centered…  But she’s funny so go see her prove it. — Acadia 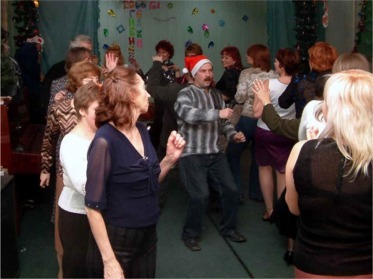 Office Holiday parties. Pfft! The only reason they exist is so that upper management can pretend to give a crap about lower level employees and mingle with the “gen-pop” for appearances sake.

The first year you work for a company, it’s pretty much assumed that you’re going to attend. You’re the new guy, the low man on the proverbial totem pole (or the actual totem pole if you work for a totem pole manufacturing company). You’re expected to make face and play nice. If you don’t, you’re instantly branded as that weird antisocial guy who never smiles and always leaves the empty coffee pot on the burner. (Yes, YOU will get blamed for that for the rest of your tenure.)
The second year, you still carry the weight of being required to show up to the office holiday party, but you’re more comfortable and you know better who to knock back drinks with and who to avoid. Remember that incident between Jan in Accounting and the temp kid that worked in the mailroom last year? Yeah, you don’t need that kind of history.
The third year you start to feel a bit of that onus leaving you. If you have kids, this is the year you can blame them for “not being able to attend”. Though, if you have a small social circle at work, it can still be enjoyable to go and watch the melodrama unfold. This is also the year you can safely “decline” if this year’s party will be alcohol-free because of that idiot from the Repo department at last year’s party. (Screw socializing with these people SOBER.)
Years four through six you can quietly be absent because you’re no longer a short-timer but you’re not up there with the “tenure” people yet. This is the point where you pretty much fade into the cubicle walls.
Seven years and up, you’re absolutely going to the office holiday party because you’re going to laugh at all the short-timers, bring your own alcohol, dance on the table and not give a CRAP. By this time, you’re the only one who knows how to do your job and you’re valuable enough that you can pretty much get away with murder and HR will cover it up for you.
Filed under: Christmas, Holiday