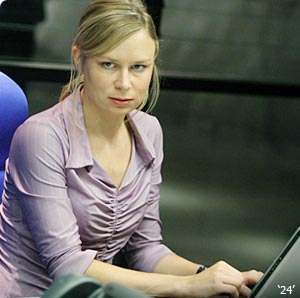 Jack needs me... So, son and husband, I'll let you leave without me. You probably won't get out of the city and will die, but the FBI likely has some sort of quarintine so I'm good...

When Jack flipped out and his whole diseased state led him to yell out Palmer’s name instead of President Taylor, for a second, I hope FOX was bringing back David Palmer. Look, I’m usually ok with accepting obvious death and keeping some order of realism, but with 24? I don’t think I would mind if Palmer came back from the dead.

Ok, sure, maybe I would mind. But, man, the amount of holes in this Almeida plan seems to be, you know, a bit out of control.

Why were the CTU servers just like lying around in a closet?

Talk about this episode in the comments…please? For some reason this episode didn’t really leave an impression on me…

OTHER THAN BAUER YELLING AT ANNOYING JANEANE GARAFALO. It’s like every moment in her life where she annoyed the shit out of me is now worthwhile. You know? It’s like, she had this purpose, and you didn’t know what it was, but then Jack put her in her place and it was like, damn, yes, so this is why she was shit on Saturday Night Live for a couple months and then left only to bitch about how sexist the show was? Worth it. So, this is why every time this chick is on TV whining…it was all to just lead up to THIS moment of Jack Bauer yelling at her? Worth it.