Oh Yeah, these Dudes were Cheatin’ 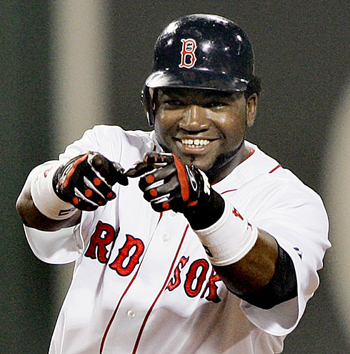 Five months after saying that steroids users should be banned for a full year, Ortiz was snared in baseball’s long-running scandal.

I don’t know if it just makes me overly cynical, but, I like it when they people that are most vocal towards the steroids problem wind up getting caught. That is apparently what has happened here, as, reportedly, David Ortiz (along with Manny Ramirez) are said to be on the list of 103 names of MLB players that tested positive for Performance Enhancing Drugs in 2003.

It really should shock no one that Manny is on the list, but Ortiz is a bit different since he was so outspoken against steroids use.

These guys tested positive in the 2003 season. They won the World Series in 2004 (I know that because I watched a Lost repeat, Jack and I were STUNNED). You want to asterisk that World Championship? Eh, probably not. Afterall, since everyone was doing it then, it’s not like they truly, as a team, got a leg up on the competition.

So, now 3 names from the list of 103 that was supposedly confidential has been revealed. Three big names in Manny, Ortiz and A-Rod. So, uh, yeah, clearly the game had a problem.