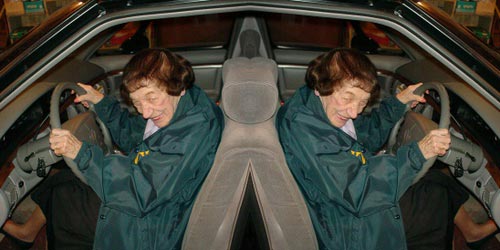 You know what’s awesome about being old?  You can run people over and everyone thinks you are cute and feels bad for you.  And you won’t go to jail cause they don’t have old people jails.  Do they?  If they did, that would rule.  I should make one.  All I would need for guards would be a slight incline and some scarecrows that look like teenagers smoking.

BOYNTON BEACH, Fla. – An elderly woman in Palm Beach County crashed with her vehicle into a man on a scooter and then kept driving to make her hair appointment, police said.

Police spokeswoman Stephanie Slater said the woman was turning right when she veered into the path of the oncoming scooter that had the right of way. The man was thrown by the impact onto the windshield and then fell to the road, she added.

Police said they later spotted the woman’s car after she had her hair appointment.

Authorities said the man suffered abrasions all over his body but the injuries were not believed to be life threatening.

Also – please note that the they say the injuries are not ‘believed’ to be life threatening.  Florida doctors operate on faith!