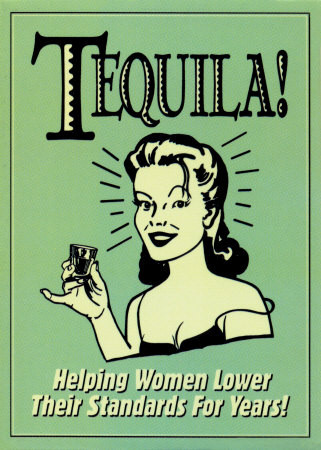 Ultra-aged or Extra Añejo tequila has been aged for a period of at least three years, without specifying the aging time in the label, in direct contact with the wood of oak (holm or holm oak) or Encino oak containers with a maximum capacity of 600 liters. Its commercial alcohol content must be adjusted by dilution water.

The tequilas shown in this section are part of the newest classification of tequila as shown detailed in the October 28, 2005 meeeting of the National Committee on Standardization.

Tequila isn’t distilled from a cactus plant but a lily though it is spiny like a cactus.
More fascinating facts after the jump!
According to a Mexican legend, the gods are responsible for its creation.  All hell was let loose in heaven because the gods were fighting. The fight released a flash which went into a blue agave and made its stalk boil. And a clear liquid came out: tequila. A present of the gods, which was reserved for the priests at the time of the Aztecs.

About 1,000 years ago, the Aztecs made pulque from the fermented agave juice. This pulque (which today is still sold in Mexican Pulquerias) is the predecessor of the Tequila. In the 16th century, some Spaniards brought the distillation process into the country. People were very satisfied with a new agave brand called “Vino Mezcal”, which they had finally created after some experiments. At the beginning of the 19th century, people began to cultivate the agave around the Mexican city Tequila, and the “Vino Mezcal” of this region took on the name of its cultivation area – Tequila.

Tequila is a special kind of the “Vino Mezcal”, a spirit made from agaves. But the Tequila is exclusively produced from one plant only, the blue Weber Agave. It may only be produced in Mexico, in five Mexican regions:  in the state of Jalisco as well as in certain towns of the states of Nayarit, Michoacán, Guanajuato and Tamaulipas.

If the agave liquid is distilled outside these five regions but according to the same process, it has to be named Mezcal (which is very often accompanied by a worm inside the bottle).

The “Blue Agave” needs about 8 to 12 years until it has fully grown up and can be reaped by the “Jimador”.   The plant is dug up and the pointed leaves are torn off, so that there is only the heart left. The heart can weigh up to 160 pounds and called “Piña” because it looks like a pineapple.

·Traditionally, the “Piña” are cut into pieces and cooked in brick or concrete heater, the “Hornos”, in which they stay between 24 and 36 hours and are finally squeezed out. During this procedure, they give off the so-called honey water or “Aqua Miel” which can then be fermented to distillable alcohol.

Now the time has come to decide if pure Tequila from 100% Blue Agave or a “Mixto” shall be produced.

For 100% Agave Tequila, only Agave juice and natural ferment yeast is used. In the case of “Mixto” it is allowed now to add other sort of sugar to the 51% Agave juice. After the  fermentation the liquid which is called “Mosto” gets distilled.

The spirit which is created during the second distillation is Tequila in its clearest form, the so called Blanco Tequila.

Each bottle of Tequila whose label does not expressly indicate that it contains 100% blue Agave, surely is a Mixto. It is also allowed to bottle this Tequila of minor quality outside of Mexico. A Premium Tequila made of 100% Agave, however, has to be bottled in Mexico. A distinction is drawn according to the duration and the way of the ripening process. You distinguish three qualities.   Blanco or silver tequila is filled up directly after distillation and stands for the pure genuine Tequila benefit. Reposado or aged tequila is stored in wooden barrels for ripening for at least 60 days. The colour will be from bright to gold yellow and the aroma is squashier than silver Tequila all in all. It gets additional flavours which improve the agave taste. Anejo or extra aged tequila ripens for at least one year in wooden barrels which are not comprised of more than 600 litres. Due to the longer ripening period, the Anejo is a bit darker than a Reposado and its taste is even softer and milder. High quality Anejo disposes of a balance proportion of their agave flavour, the soft texture, the vanilla flavour and the spice which is caused by the ripening in the oak barrels.  There is a fourth category: joven (young) or gold Tequila. If white Mixto is mixed with flavours and colourings, that becomes a “Gold Tequila”. These additives should feign the barrel maturation. Each bottle of Tequila has to wear “NOM”, a number assigned of Mexican government. This number provides the information on which distillery has made this Tequila. Each distillery has its own number. Often the distillery or the owner bears a name other than the Tequila which they produce.

If you read this far, I think you will agree, the George Carlin bit is the best part of this whole shebang. Sorry, bored person.