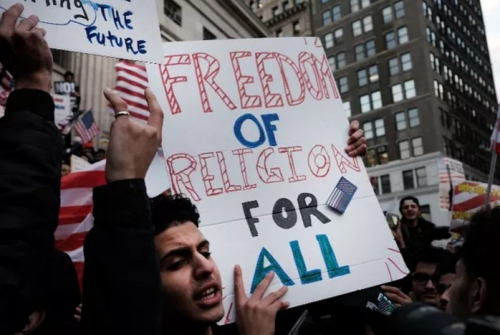 President Trump issued “Muslim Ban 2.0” this week and it’s more of the same. If you’re from one of six Muslim majority countries that have no history of terrorism on American soil, you can expect to be penalized and put in the penalty box when coming to the United States. Simply because you’re probably Muslim. Because Muslims are American’s new boogeyman. Unfortunately, the ramifications are much larger.

If you’re American and have brown skin, wear a turban or a burka, or have a “foreign-sounding” name you’ll get detained, questions, your possessions confiscated and searched – all in the name of national security. Because we have to protect our way of life here in America, right? And according to you, Muslims aren’t American.

So this letter is to those argue that we should track Muslims in the United States or at the border, treat them differently, or otherwise discriminate against a Muslim, be they citizens or other – because you want to “protect our way of life.”

I have news for you; the Constitution is our way of life, not whatever mistaken impression of America you hold dear. The First Amendment guarantees the government won’t discriminate based on religion.

There is nothing more American than freedom of religion. That’s America, folks. That’s literally the reason why we settled here!

People who espouse the above view are under the mistaken impression that this is a Christian nation and Christians should get to set the rules on how other religions operate. They are wrong on this.

They are also under the mistaken impression that being Islamic means you are an inch away from being a terrorist. We have millions of Muslims living in the United States and they have been here for generations. They are citizens, with every right to worship and live as freely as you.

Being American is to accept that you are part of the “Melting Pot” and to be willing to fight for the freedoms of all Americans, and not just those who think and look like you.

Being American is to understand that just because other countries practice discrimination based on religion, and falsely conflate an entire religion with terrorism, doesn’t mean we can, or should.

Being American means understanding that we are a beacon – and people who hate us will want to extinguish that beacon. We can’t stop shining because we’re afraid – this is when we need to shine brightest.

The best of America is not when we cower and turn to hate and discrimination in the face of a threat. It’s when we look that threat in the eye and say “You can’t make us become like you.”