Paranormal Activity Can Suck It 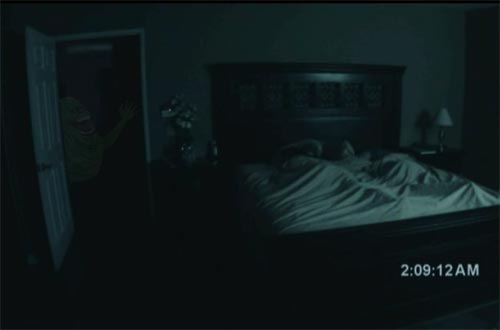 There's something strange...in their neighborhood.

Stupid Girl. You should have gone to the mall. Nobody sees ghosts at the mall.

o I watched Paranormal Activity this past weekend and I realized that even though I was psyched to see it, I still wanted to punch it in the face when I was finished with it.  But not for the reason you’d think.  I don’t think I am mad at it because it is a fairly decent horror movie that someone made for cheap.  I am mad that it is a fairly decent horror movie that you and I could have made for less than eleven thousand dollars and it would not have become some big sensation.  Cause it isn’t THAT good.

Is it good at all?  Well, I guess it depends on if you liked Blair Witch Project.  If you did, then you will like this.  If you didn’t you probably won’t like this.  If anyone tells you that they are not alike, take that person’s eye and bite it.  Hard.  They are lying.  If you changed the house into some woods, and the two people in this movie into three people it would be the same movie.

So why did everyone get such a boner for this movie?  I really don’t know.  There are a couple of good shock scares in it, but the ending (whether the theatrical version or the original) is stupid.  The acting itself is good and I read that the director wanted to really make it seem home made in case some studio bought it and wanted to pretend it was real.  And maybe THAT’S my problem with it.

See, I don’t care how shitty the camera work is, or how ‘real’ the acting and dialogue is (apparently there was not much of a script so they would ad-lib and seem natural) nobody would ever believe this is real.  Why?  Because: SPOILER ALERT –  Spoiler after the cut!


If you saw fucking monster ghost footprints in your hallway and could show on camera that they were not fake you would NOT fuck around and try to ‘figure it out’ themselves or ‘call a psychic’.  No.  You would call the news, or your friend that’s a lawyer and figure out how you could get balls ass rich off of your monster fucking ghost house…video tape.  Fill the house with local news hacks and that old bitch from the Amityville Horror.  Or call the plumbers from Ghost Hunters.

You would do any of those things.  You would not just wait around to get killed.  Stupid stupid stupid movie.  At least the Blair Witch kids were stuck in the woods.  They had no choice.  YOU dumb fucks could have gone to Olive Garden.  Dummies.  Give the money back.  Every penny.  Gah.  I am upset now.  Happy?