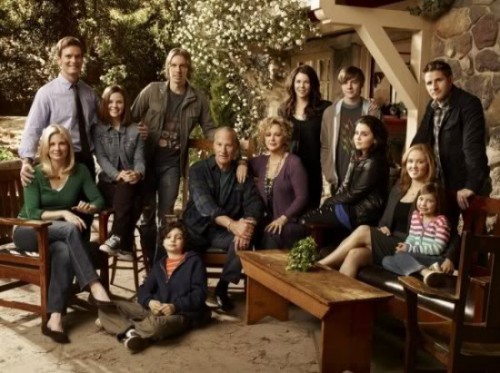 NBC has been hyping this show for a while and my interest was piqued.  I was excited about the cast (I love Peter Krause from Sports Night and his comedic timing is wry, dry and wonderful) and Ron Howard can just about do no wrong.  Tommy Schlamme did some awesome stuff on West Wing.  I’ve heard Lauren Graham doesn’t have any sense of humor in real life, but she plays sarcastic well.  Even if I am still mad at Bob Dylan, hearing Forever Young in the opening scene made me happy.

Some random chick has a thermos full of sperm in her freezer and exhorts a breeding promise from some guy who doesn’t have any interest in procreating.  The same guy is later shocked to meet his 6 year-old son whom he knew nothing about.  The patriarch has condoms in his desk drawer.  A couple of kids are arrested for weed possession, another diagnosed with Asperger Syndrome, and yet another kid runs away to his dead beat dad after catching his mom in flagrante delicto.  There’s a lot of fucked up kids on this show.  I lost count.  I also lost interest.

One episode in, there’s an awful lot of angst and zero hilarity.  I’m thinking it’s a non-funny Modern Family.  I don’t know if my Casey McCall love will be enough to keep my attention.  At least Dirty, Sexy Money had Blair Underwood providing additional support.  It’s an ensemble cast with a dreary plot line.  I have enough real life drear; I’m not spending any precious recreational time with strife and drama and crap.  Make me laugh and I will love you forever.  (ER is exempt from this criteria.)  I’m now reserving all my NBC anticipation for Jim & Pam’s baby on The Office.  I know that will be funny.

The opening scene was a baseball game with Dylan and the closing scene was a montage of another baseball game again with Forever Young playing.  (Also, Rod Stewart can go to hell, the stupid plagiarizer.)   I enjoy cyclic return more than I ought so I will give Parenthood another look next Tuesday.  This is me withholding judgment but with prejudice.

I embedded the video because I don’t think any of us can get enough of pre-marblemouthitis Dylan.  It’s true.