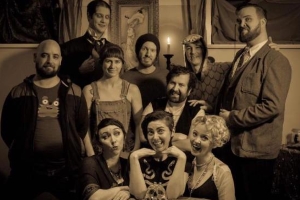 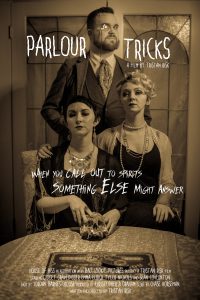 A seance yields some calamitous results when squabbling family members are over-eager to produce a will.

For those that read my last article, the review for Amazon Hot Box, it should come as no surprise that I am a huge fan of Tristan Risk’s work. She is a phenomenal actress, model, writer, and accomplished stage performer. I first became a fan after seeing one of her earliest performances in the Soska Sister’s truly beautiful, American Mary, where she played the role of “Beatress Johnson” opposite Katharine Isabelle’s “Mary Mason”. It was not long after that that I was given the opportunity to see her work from a much more in-depth perspective, working as a sound editor for an indie feature starring Ms. Risk as a woman caught up in violent and murderous episodes of mania. It was at that point that I went from being a fan of her work to seeing her as my absolute favorite actress in the industry. Having watched her evolution and growth as an artist over the last several years has been a huge influence and inspiration for my own filmmaking endeavors. So, suffice it to say, since posting the announcement for Parlour Tricks‘ release, nearly four months ago, I have been counting the days for its release.

Parlour Tricks tells the tale of a séance led by “Aleister Crane”, played here by Sean Covernton as he chews scenery the way most kids chew bubblegum, and it is absolutely glorious. Watching Covernton as “Crane” reminded me of the comedic turns of Vincent Price during his run on the wonderfully campy 1966 Batman series or his over the top voice work on The 13 Ghosts of Scooby Doo. “Crane” is leading this séance at the behest of “Millie” (Mandy Mauchline), “Hazel” (Shawna Mauchline) and “Edward” (Tyler James Nicol), in order to communicate with their dearly departed “Aunt Esther” and, most importantly, to find her will. While I was laughing throughout the entire short, it was the exchanges between “Millie” and “Aleister” that really hooked me. Mandy Mauchline brings an absolutely perfect 1920’s flapper sass to her portrayal of “Millie” and it worked fantastically with the over the top creepiness of “Crane”. Her portrayal was so good that I half expected Clark Gable to burst through the door and sweep her off her feet. Otherwise, without giving any spoilers, it is the final bit that had me laughing so hard I could barely breathe. I wasn’t expecting it in the least and it had my partner and I laughing through the end of credits. From start to finish this really is a hilarious short.

And here we are, as always, at the technical bits. This being a short film, I’ll try to keep this short. Honestly, that’s not going to be terribly difficult. Tristan Risk put together an excellent team for this film and it shows. The cinematography and editing look fantastic. Jordan Barnes-Crouse knows his job, he does it well, and the result is a beautifully shot and edited film. The sound design and music, handled by Logan Laidlaw and Kris Wood, respectively, is perfect. Their work on this short is on par with what you would expect from a proper feature film. Unfortunately, I’m not sure who was in charge of costuming. To whomever that was, you did excellent work and the characters all looked flawless. I’ve always been a big fan of the 1920’s flapper style and “Millie” and “Hazel” absolutely looked the part. As I’ve said many times in the past, all of this can be perfect but it really comes down to the director to bring it together and make it all work. Thankfully, Tristan Risk is an excellent director. Tristan has been a performer, writer, and actress for most of her life. She is an incredibly talented storyteller and finds art in even the most mundane things. For her to utilize those talents as a director makes perfect sense. The most impressive part of her directorial debut, at least in my opinion, is how funny Parlour Tricks is. The fact that this film kept me laughing for nearly the entire runtime of the film speaks volumes to Tristan’s abilities as a director and I cannot wait to see where she takes those skills next.

So, obviously, I am very impressed by Risk’s directorial debut. Parlour Tricks is well written, the performances are fantastic, and Risk has shown that she is absolutely a competent and talented director. If this film makes it to a festival near you, go see it. Seriously, find out where it’s playing and go see it. This was an incredibly fun short that will keep you laughing from start to finish and I highly recommend tracking it down. Tristan Risk knows how to bring humor to the macabre and with Parlour Tricks she does it perfectly.