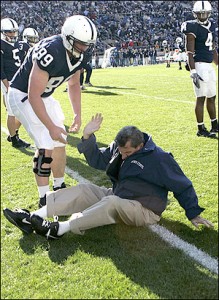 DONT HELP HIM UP MAN HE IS ALRIGHT. COME ON!

Joe Paterno says he’d like to see either Rutgers, Pittsburgh or Syracuse join the Big Ten. And the legendary Penn State coach also knows which school he wants to keep out: Notre Dame.

Paterno met with reporters Wednesday at an alumni event near Allentown, Pa. “If I had my choice, someone that can give us the biggest TV exposure in the East,” JoePa said.

Makes sense. Fuck Notre Dame. He said they had their chance.

He did not add that they were cocksuckers, but clearly it was implied.

He did not add that they were asshole douchebags, but clearly it was implied.

He did not add that they were rat shit bastards, but clearly it was implied.