When People Bring Knives to a Gun Fight (on Twitter) 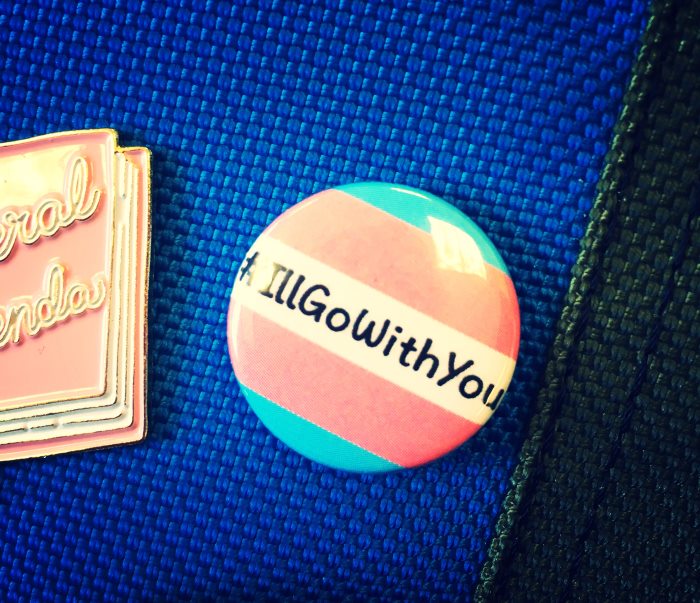 Let me start this post off right: trans women are women. The end.

OK, now that we’ve established that, I’m going to explain a few other things you may or may not be familiar with. The first is intersectionality (wikipedia). From a USA Today article, here is a good synopsis:

If feminism is advocating for women’s rights and equality between the sexes, intersectional feminism is the understanding of how women’s overlapping identities — including race, class, ethnicity, religion and sexual orientation — impact the way they experience oppression and discrimination.

Now here’s another term: TERF. That stands for Trans-Exclusionary-Radical-Feminist. Here is me defining it for Acadia yesterday: 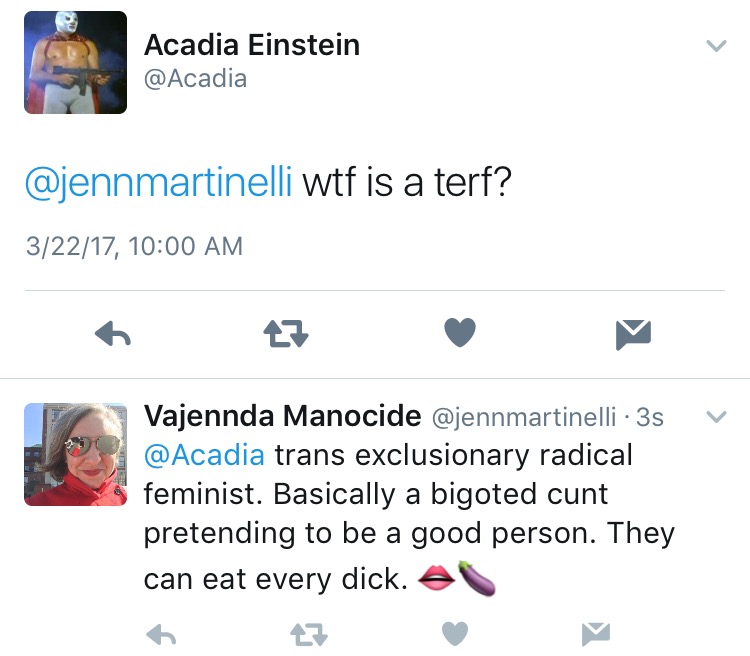 #sorrynotsorry for my language.

In a nutshell, these are women who not only (as if this would be OK, which it would not) don’t want to include trans women in their definition of women, but they actively advocate for exclusion and mental harm towards trans women. They claim that trans women are violent, disturbed, want to assault them, etc. Let me put it to you this way – when I started a fight with a TERF on Twitter yesterday, I ended up not only with a bunch of her fellow TERFs defending her, but also some alt-right folks. So, nazis. Nazis are happy to get in bed with TERFs. That means they’re bad people.

There’s some nonsense going around saying calling people a TERF is a slur. Welp, folks, since it literally means you are being hateful towards others, again, just like nazis, then I’m OK with you considering it a slur, honestly. It is, I guess.

Slur: an insulting or disparaging remark or innuendo

So this is all to set you up to enjoy the following Twitter event that happened yesterday – I’ll let the screenshots speak for themselves first: 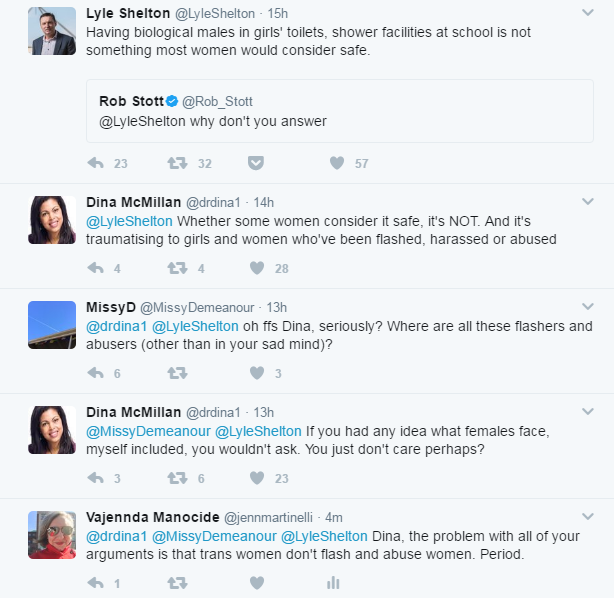 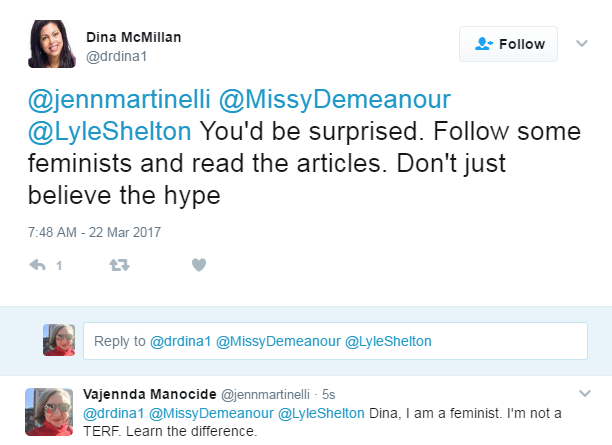 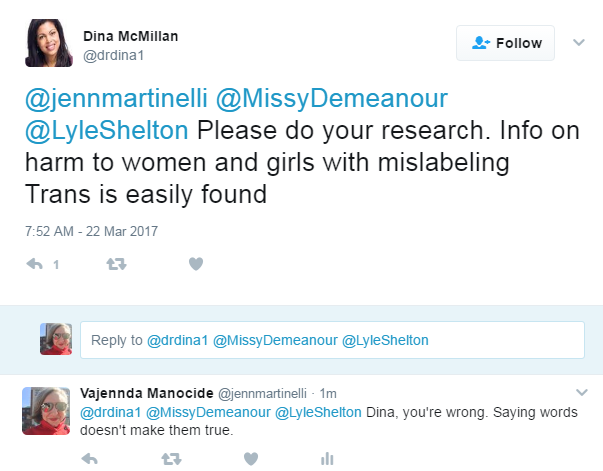 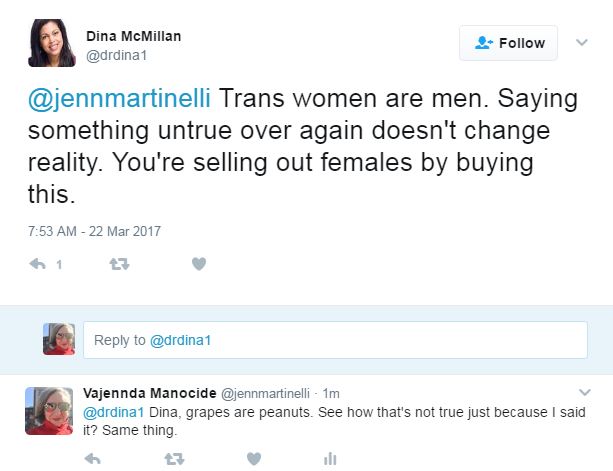 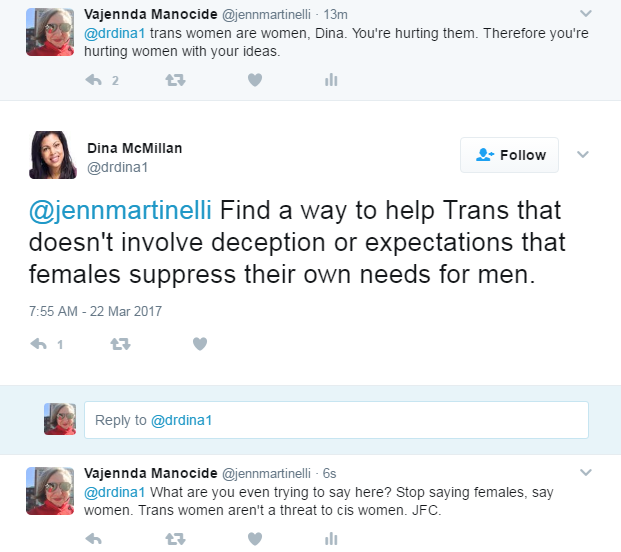 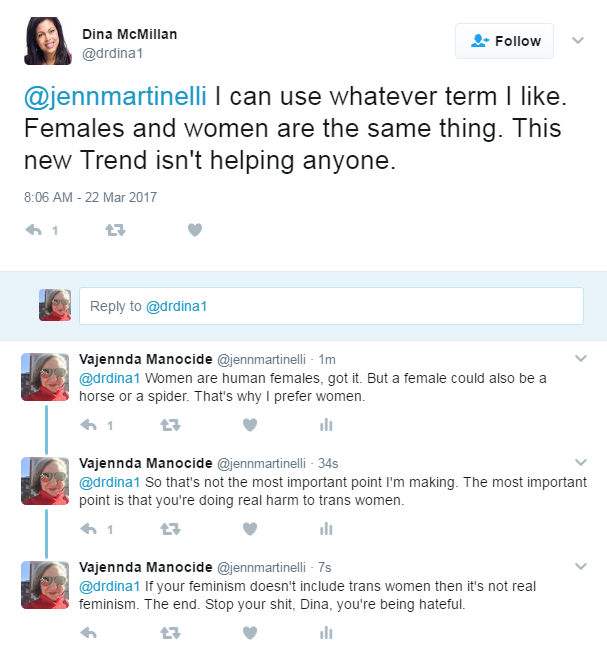 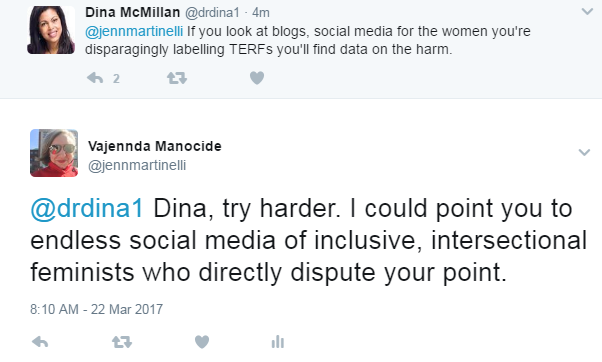 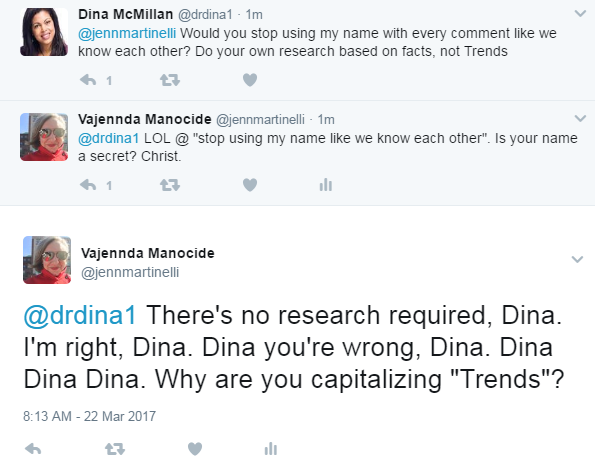 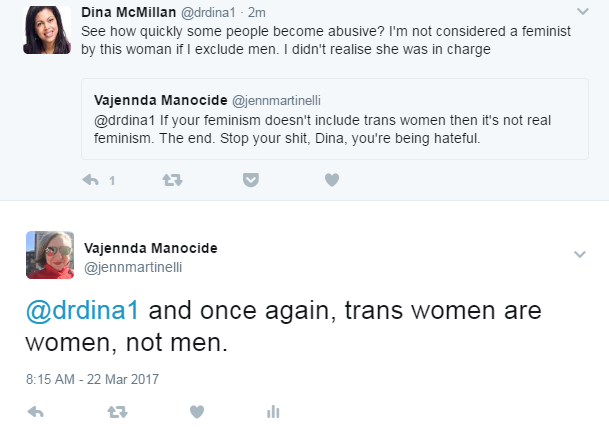 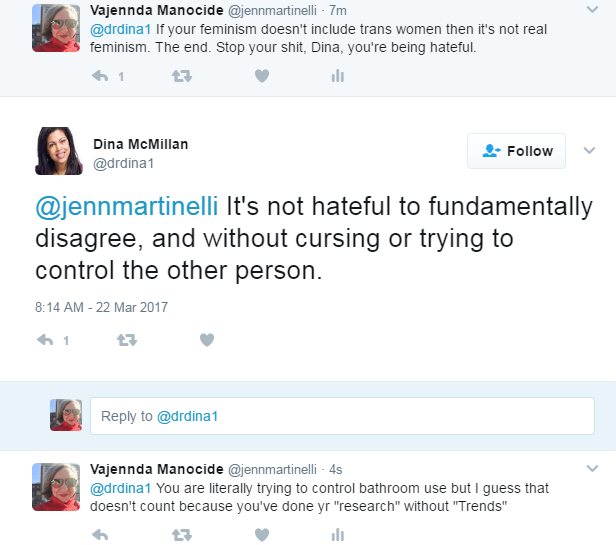 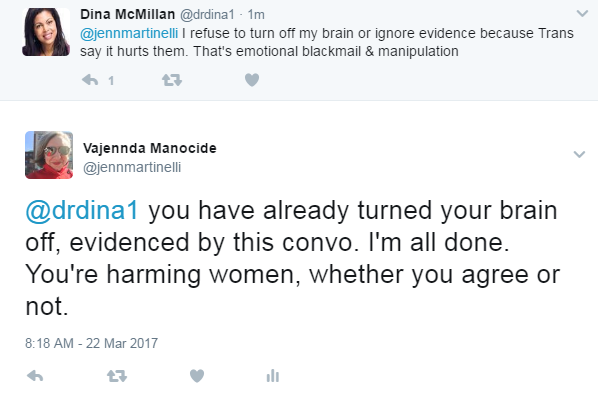 Oh, and here are some related gems I got from fans and friends of this trash fire. 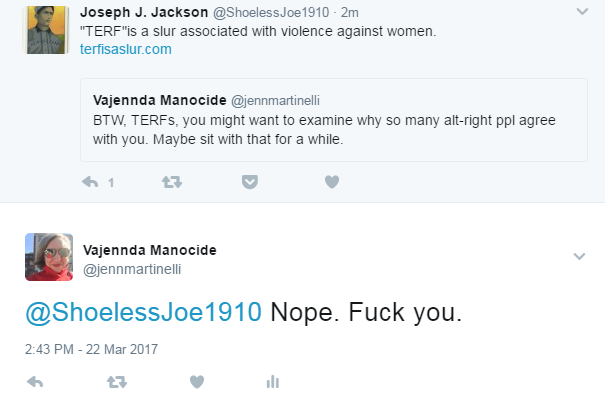 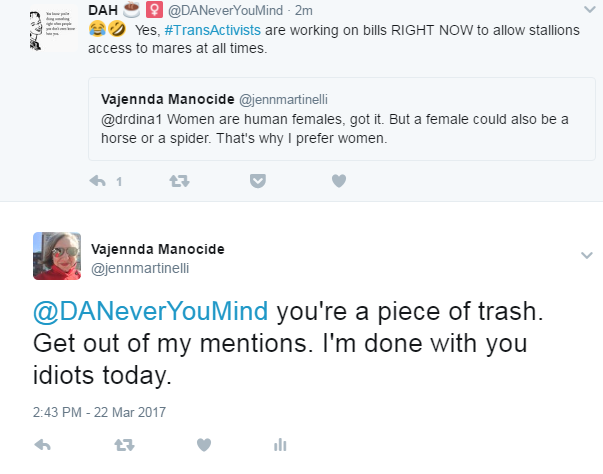 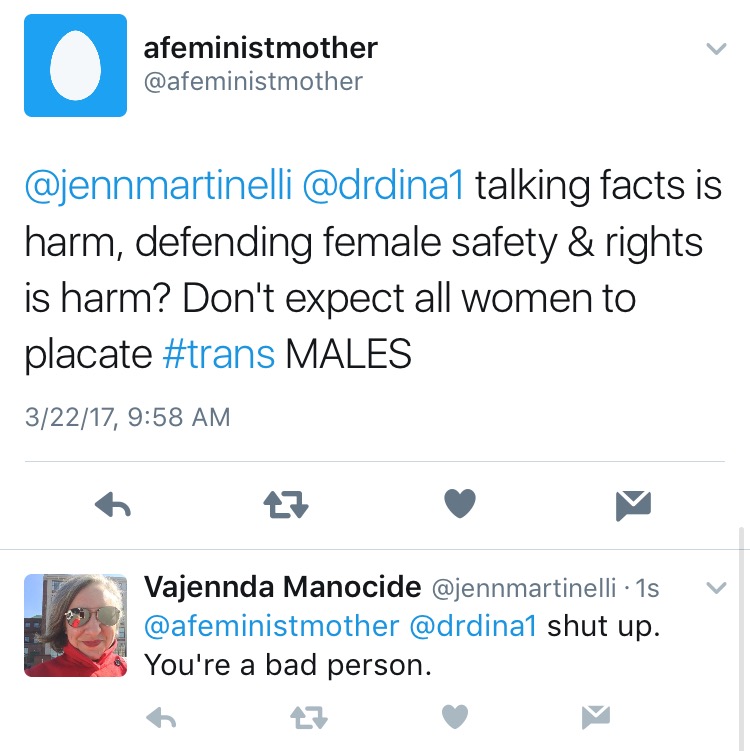 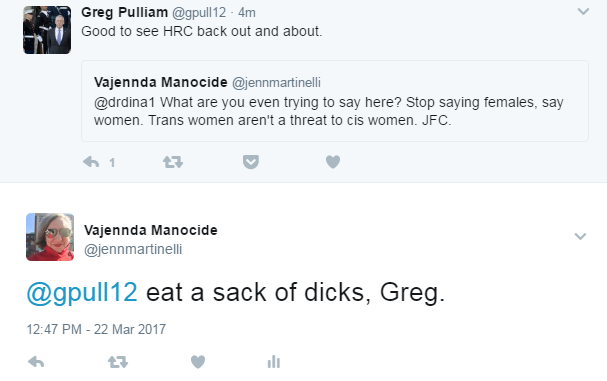 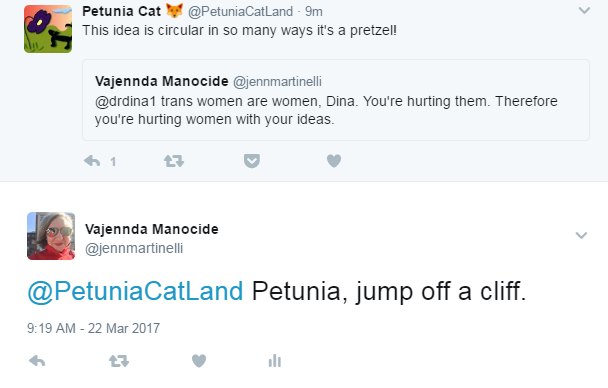 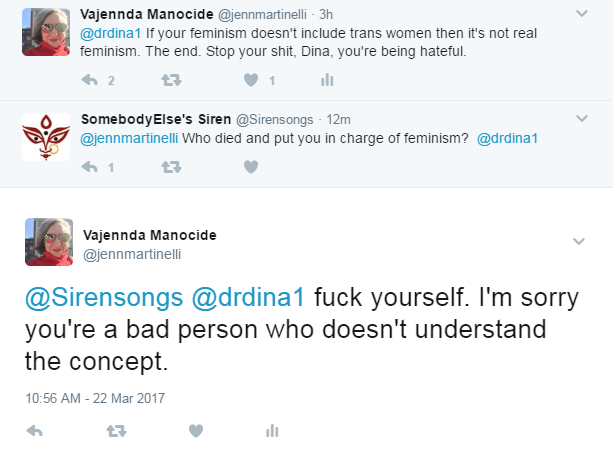 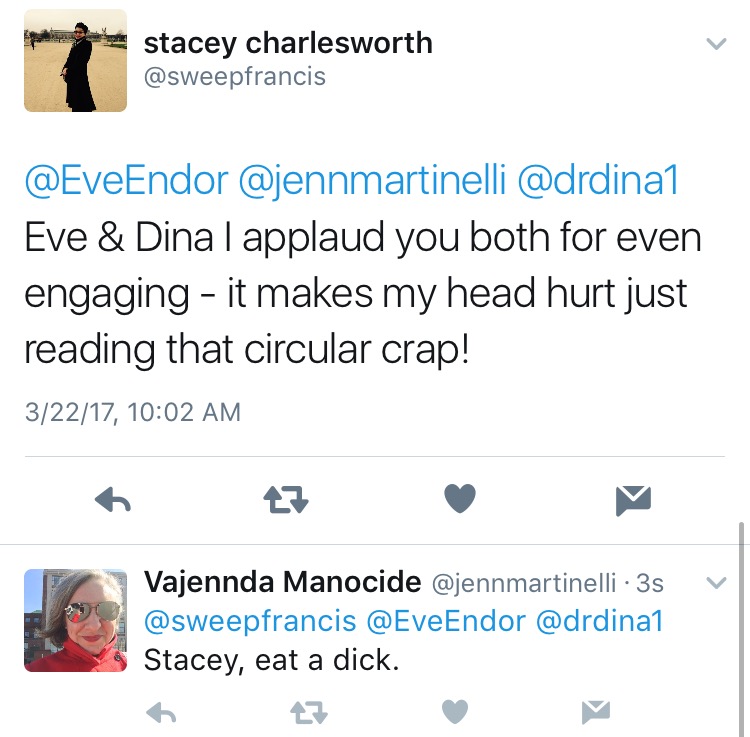 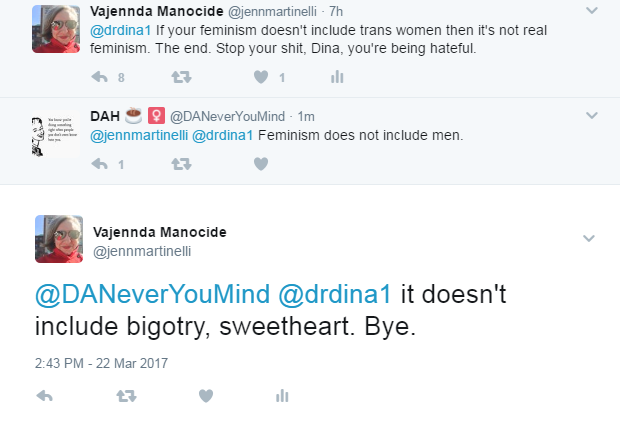 And then Dina couldn’t keep her face shut so: 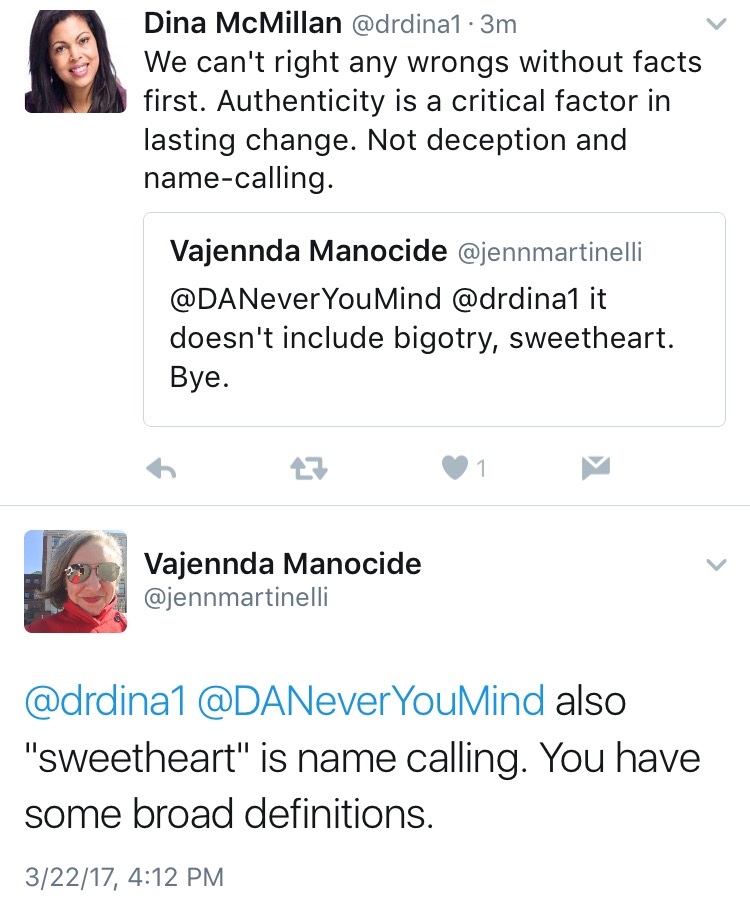 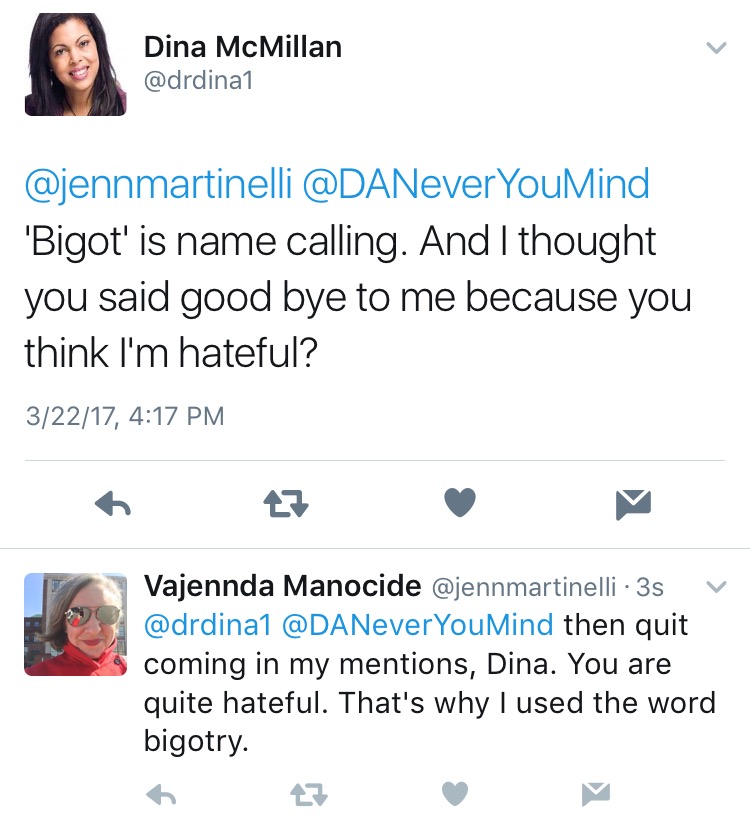 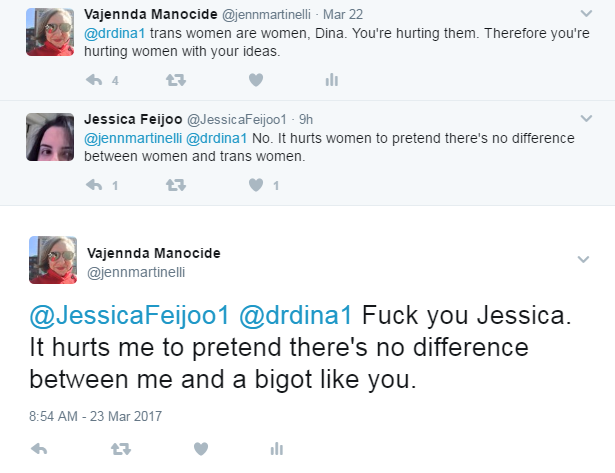 My most basic point is – even if you don’t “understand” trans women (or trans men for that matter), there’s no reason for you to discriminate against them [hey, I don’t understand you, TERFs, at all, but strangely, I still believe you deserve basic human rights].

Claiming it’s all a trick to get into a bathroom and molest you is disengenuous fear-mongering. It’s exactly the same thing as claims that all gay folks are pedophiles or all black men want to rape white women. These are things that sound ridiculous to anybody who isn’t an ignorant monster living in the imaginary “good old days”. It’s a blatant, hateful lie. Do you really want to put yourself in the group that will be looked at in the future the way we look at the white folks in this photo now? 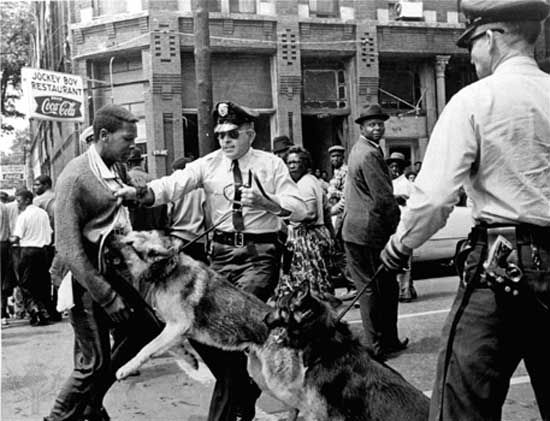 Because that’s exactly what you’re doing.

On top of that, it’s already illegal to harass and harm people in bathrooms. You don’t need to worry about it, guys. 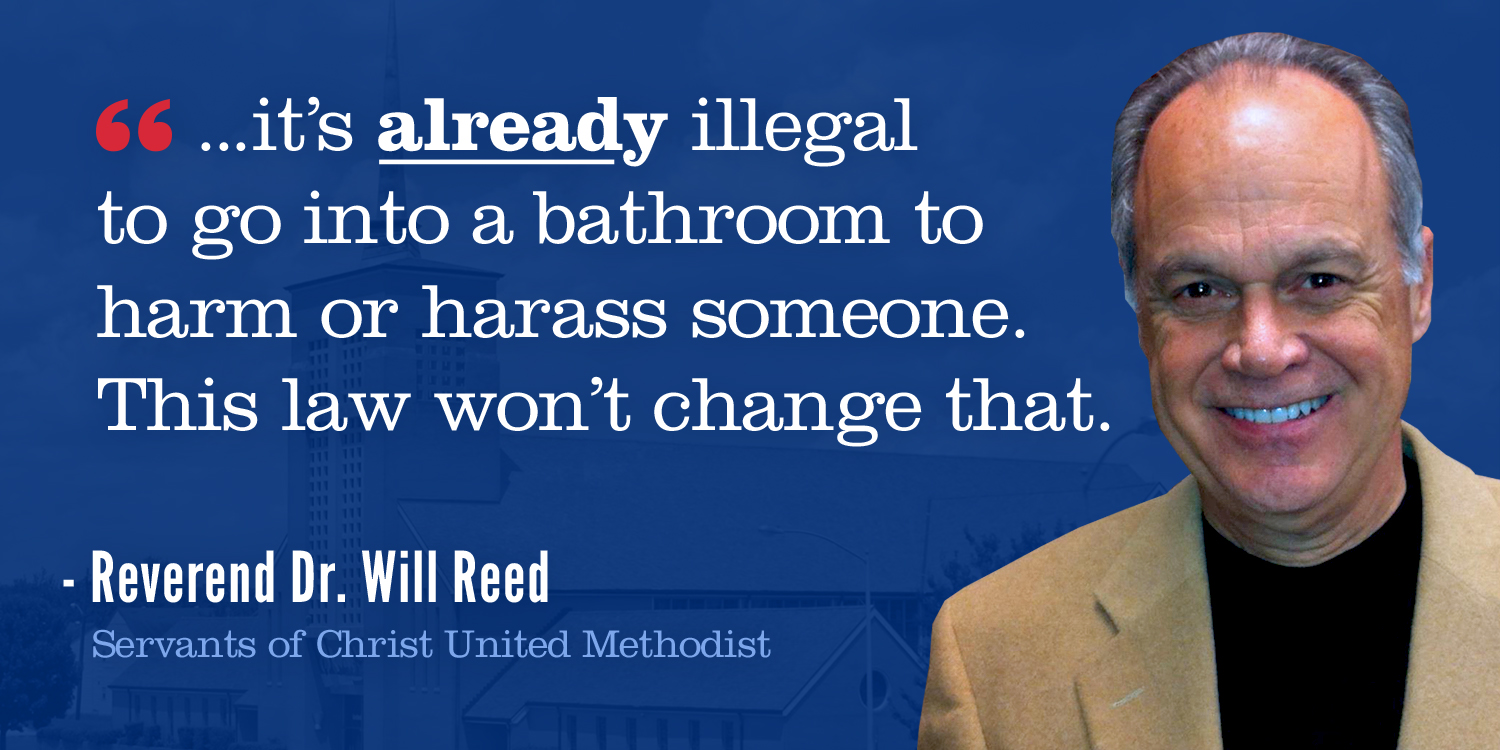 Just let people pee where they feel the most comfortable for f***ssake. Stop being a**holes. In the meantime, I’m intersectional AF and I’m going to school you every time I see you being terrible, until you get it, or until you die of old age and your hopefully much smarter, more evolved children take over.