Why People Who Hate the Patriots Can Suck It 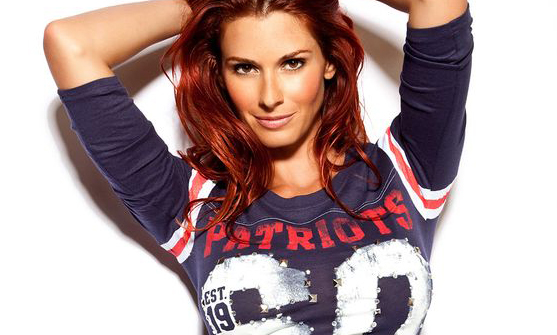 The Pats play the Ravens this afternoon in Foxboro and if goes well they will advance to the AFC Championship game and then win the Super Bowl.  And the reason why I am saying this is because I am a Patriots fan.  Always have been.  Always will be.  And for all of you that say the Patriots suck and that Brady is a pussy and blah blah, I got two words for ya:

And here’s why:  you hate the Pats right now because they are good.  You were so glad that Eli Manning and the jerk who catches footballs with his head beat them in their otherwise undefeated year you could barely contain yourselves.  And I took it.  And I took it when we lost to the stupid Giants again.  And I take it whenever they lose in the Playoffs.  I can even take it when our second best tight end murders someone and has to quit the team (as opposed to the how the Ravens handle the same thing).  And why?

Because I loved the Pats when they sucked and will love them when they eventually suck again.  Because that is what real fans do.  And that is also why I hate that stack of crap Chris Christie.  Here is a rundown of my life as a Pats fan. 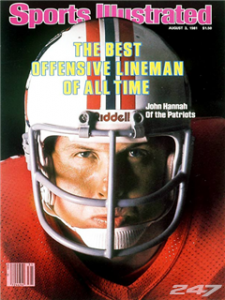 I am from Maine which means that they are the only major league team in any sport in the country that actually includes me in its coverage area.  Everything else I get regionally is Boston.  If it weren’t for the Pats, I would be like the rest of the no-team losers like Mississippi, New Mexico, Montana, etc.  And by the way, let me please tip my hat to the Minnesota Vikings and Utah Jazz for helping the rest of their state out with the name.  And by that same token, screw you, New Orleans Saints.  Be the Louisiana Saints!

When I watched the Pats as a kid they sucked so bad that we rooted for individual players instead of the whole team because we knew they sucked.  Andre Tippett was our best defensive player.  We had John Hannah on the offensive line and one time Sports Illustrated put him on the cover and called him the best offensive lineman of all time.  I was little but I had that cover on my wall.  AN OFFENSIVE LINEMAN!  It was all I had.  Because we sucked.

Then, in 1985 we actually made the playoffs.  And all the way to the Super Bowl!  Of course we had to play the stupid ’85 Bears.  THOSE ’85 Bears.  The Super Bowl Shuffle ones.  The team that Chicago still uses to make the rest of the league think they are in the upper echelon.  Here’s how SI predicted that game would go: 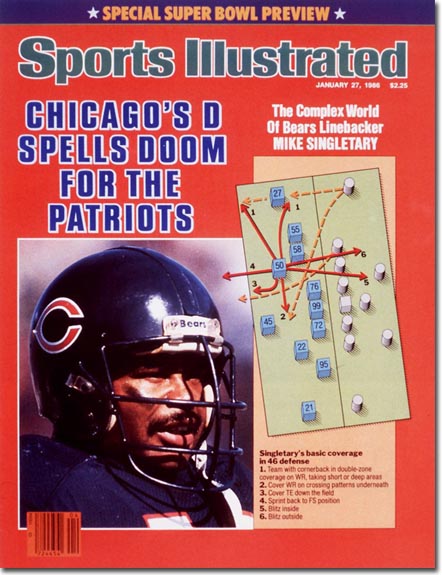 They weren’t kidding either.  We lost 46-10 and it was the worst beating in Super Bowl History for YEARS to come.  And it was so humiliating that we actually complained that Ditka let The Fridge get a touchdown and not Walter Payton.  How is that for scraping the bottom of the barrel?  Oh, and I remember bragging that Steve Grogan (the Pats QB who came in at the end and threw their only touchdown) was the last quarterback in NFL history to call his own plays (that’s true, FYI).

And this was our pre-Super Bowl response to the Super Bowl Shuffle. 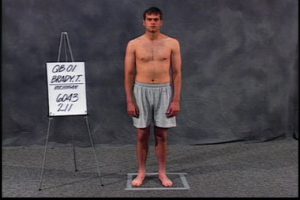 Then in ’96 we lost to the Packers and we were pretty resolved to sucking forever until Drew Beldsoe got hurt and Tommy started playing.  This Tommy.  Tommy Brady there, on the right.  And we ended up winning the Super Bowl and then we won two other ones and as a sidenote we became the undisputed kings of winning the Super Bowl by three points!

And now we are in the playoffs again.  And we have a good team this year.  But I will still have people telling me that we suck or that Brady sucks or what have you.  But I don’t care.  And I am pretty sure that every time someone calls Brady a homo he goes home to his super model wife and asks her which of his three Super Bowl rings she wants him to wear while he…you know.

And not for nothing, we are now 3 and 4 in Super Bowls.  If we win it this year, we will be even.  If we get into it and lose, we will be 3 and 5.  Not quite Buffalo Bills terrible, but pretty terrible.

“I was a big fan when I was your age,” Christie told a group of New Jersey elementary school children in June 2013. “I was a big fan of Roger Staubach, who was the quarterback for the Cowboys back then. The Giants and the Jets pretty much stunk when I was a kid and my father was a Giants fan. I used to remember watching him when I was eight, nine years old and every Sunday he’d watch the Giants and yell at the TV set. I used to think to myself, ‘Why would I want to root for a team that makes you angry?'”

I’ll tell you why, jackass bully.  Because that is what being a fan is.  You get mad, you cry, you make up, you win (except the Cubs) and the bad times make the good times that much better.  You just liked the Cowboys because they were awesome when you were a kid and you wanted to cheer for a winner.  And not only that, you are a fair weather fan, too.  I didn’t see you munching in Jerry Jones’ box when they went eight and eight the last three years. 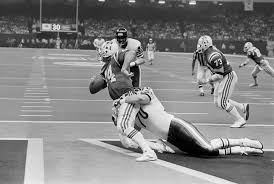 Pic unrelated except that it is Grogan getting squashed in ’85 and I hate Chris Christie and wish that this would happen to him.

Oh, and you didn’t want to root for a team that makes you angry?  Why?  You are angry all the time anyway.  You suck.  And I hope the Pats play the Cowboys in the Super Bowl and crush them.

And I realize that the Pats will be terrible again at some point.  And I will still love them, because that is what fans do.  And then when you tell me they suck I will say: yep!  But if you tell me they suck now, I will smile and say you are confusing them with your mom.  And if you try to tell me I should feel bad for saying that because your mom is dead, I will say that she should have learned to breathe through her nose.