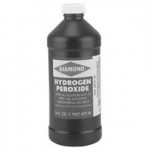 This was written by Becky Ransey of Indiana (a doctor’s wife), and I want to share it with you. She was over recently for coffee and smelled the bleach I was using to clean my toilet and counter tops.

This is what she told me:

I would like to tell you of the benefits of that plain little ole bottle of 3% peroxide you can get for under $1.00 at any drug store.

What does bleach cost?

My husband has been in the medical field for over 36 years, and most doctors don’t tell you about peroxide. Have you ever smelled bleach in a doctor’s office? NO!!! Why? Because it smells, and it is not healthy! Ask the Nurses who work in the doctor’s offices , and ask them if they use bleach at home. They are wiser and know better! (Editor’s Note – WTF is with number 5?)

Please think about this:

I could go on and on. It is a little brown bottle no home should be without!  With prices of most necessities rising, I’m glad there’s a way to save tons of money in such a simple, healthy manner!

This information really woke me up. I hope you gain something from it, too. I’ve known that with an infection, a bit of peroxide on that will fizz and help to cure the infection. I’ve also known that if you had a dog that’s flea infested, a bit of peroxide in it’s bath water will kill them immediately. But never thought of all the above uses. It is a very useful bottle to have in your home.