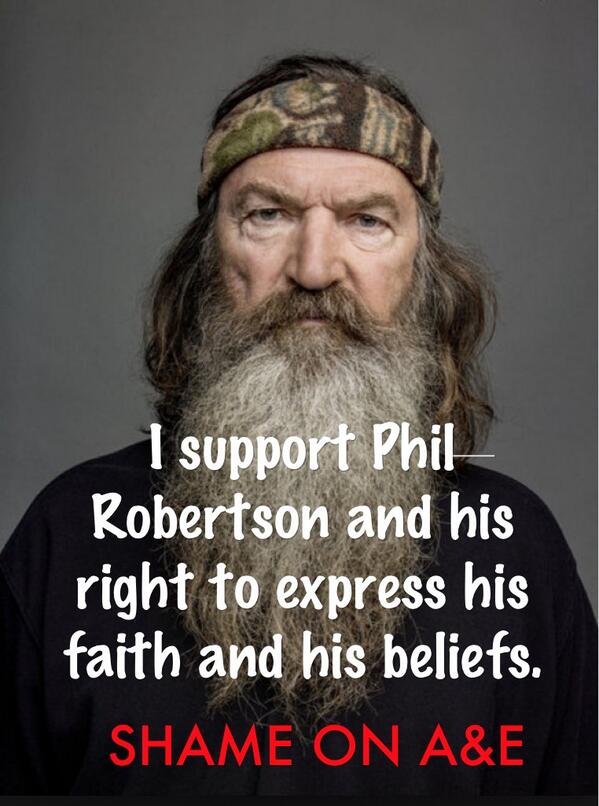 I found this on: Fire Andrea Mitchell.  Not that I knew the site existed before now but I found this pic when I was looking for Phil.  From his article:

Robertson didn’t do anything aside from daring to exercise his freedom of speech rights and speaking about how he disagrees with gays in an article with GQ comments. It just amazes me how a population of about 2% of this country has such vast control over the speech police.

I know he is not overtly saying that somehow Mr. Robertson’s right to Free Speech was infringed upon.  However it seems like lots of people are.  Let’s refresh.

Congress shall make no law respecting an establishment of religion, or prohibiting the free exercise thereof; or abridging the freedom of speech, or of the press; or the right of the people peaceably to assemble, and to petition the Government for a redress of grievances. — The First Amendment

I have been squinting at this for a while and I can’t see where it says anything about getting suspended from your job.  Also I am not sure why they needed to pack so many things into one Amendment.  Sheesh.  Anyway, I have seen all the conservative dimwits ranting all day and I saw that picture and It makes me laugh and laugh.  There are some other good ones, too.  Saying that it is somehow a crime that Mylie Cyrus could be on the MTV Awards but Phil got suspended.

It is business, you dummies.  A&E is making money off this either way.  Look at all of us talking about it.  My favorite part out of this is finding that other site.  TROLLOLOLOLOL