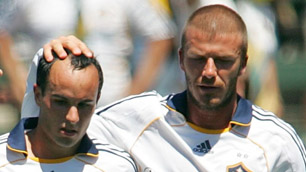 Here they are celebrating a goal. Later, at dinner, shit would be kept real, however.

Well, or maybe not like Beckham. Because, according to this book that was excerpted in Sports Illustrated this week, Beckham isn’t quick to pick up the tab and that kind of irked his broke-ass MLS teammates.

Here’s an ESPN summary of the article, but they focus on Landon Donovan calling out Beckham for being a bad teammate and not Donovan lines like:

“He’d better be picking up meals too,” the excerpt quotes Landon Donovan.

I don’t so much care about the interaction on the field, because it’s MLS and not quite real soccer yet, so I mainly just want to hear more stories about MLS players whining about Beckham inviting them to a steak dinner and then keeping his millions in his pocket.

That stuff has great potential. I mean, with my eyes, I can see that the team is terrible, keep this backstage, who is paying for what meals drama coming. Maybe Beckham and Donovan went out for beers and Beckham only tipped like 15% and Donovan called him out on it. It could be a great sitcom to help promote MLS.