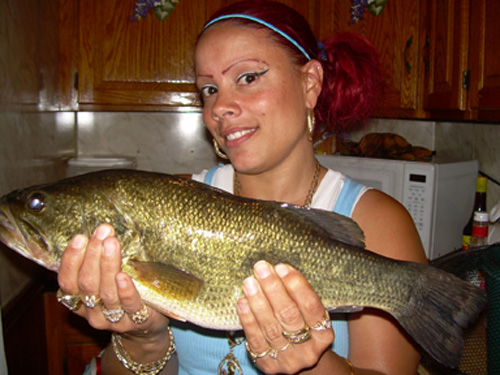 The fish was attracted to the shininess of the fisherwoman.

Did they eat it?  Did they have it stuffed and put it on the wall?  Is she afraid of thieves stealing her jewelry box so she wears all of her jewels all the time?  How long before they ran out of ketchup?  That bottle looks a little empty.  Did they have a spare?  Do you think the next person who used it forgot to shake it and got that ketchup pee all over the thing they were putting the ketchup on?  I hate that ketchup and mustard pee.  I think the people who make that shit should fix it.  What’s that thing on top of her microwave?  What’s in that Tupperware thing on the left?  How can her eyelashes be bigger than her eyebrows?  How come she is all gussied up but has short fingernails?  Where did they get that fish?

Filed under: fish, Pics, Pics I don’t know why I have