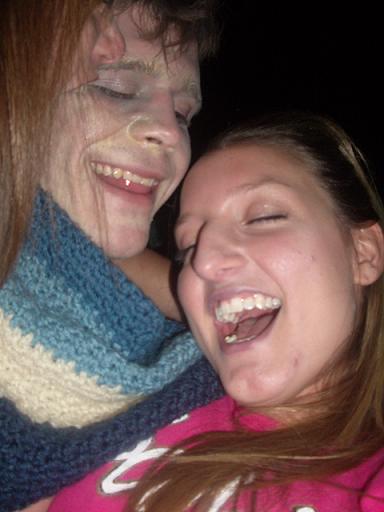 There are a lot of things this pic could be about.  It could be about some friends goofing around.  Maybe a party.  But there is only one thing it is really about.  It’s about the girl in the pink being devoured by zombies.  Look at the guy.  He’s green, for fuck’s sake.  And he’s alll, wet and shiny or something.  So either he’s a zombie or he has Captain Trips.  But since he is apprently clothed only in an afghan, I am gonna go with zombie.

And you may not even have noticed the other zombie in the upper left.  Look at her getting ready to take a big giant chomp out of poor pinky’s face.  Then again, now that I think about it, pinky sort of looks like she’s gonna bite whoever took the picture.  Maybe I took this pic when I was a zombie hunter.  That was my M.O.  Take a picture, then yell: EAT THIS< ZOMBIES! And then knock them in the head with a pick axe.  Worked like a charm.  Shit money though.  Anyway, the guy has a green face!

Filed under: careers, Pics I don’t know why I have, zombies