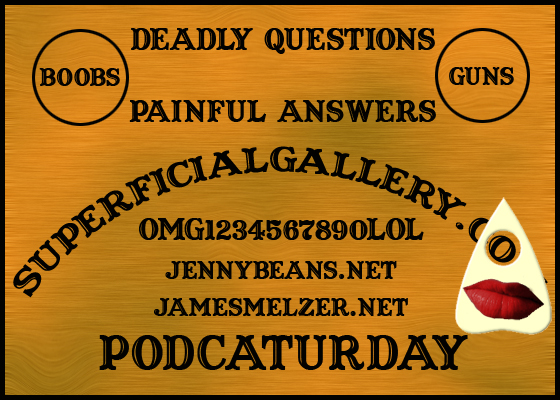 Well, it was Podcaturday again and here I was with nothing to wear but this suit of armor and all this delicious honey.  Good thing podcats are done with voices and not videos; Beans and Melz couldn’t hear what I was wearing except for the muted clanking sounds and the creepy drips.  So listen if you want.  And click these links.  And watch that frigging video cause Vange loves it.  The first half is funnier than the second half, so you can probably stop watching half way through if you really need to save that FIFTEEN SECONDS.

Speaking of Vange, you will notice that her lips are back in the header (insert joke…I said insert…heh) but the slogan is a little different.  What I WANT to do is have the image change every time you visit the page so I can do different slogans but apparently my computer is not like the Star Trek ones cause I have told it to do that like 500 times and it won’t.  If one of you people can tell me how to do it, I will give you a shiny nothing.  Also, Vange now picks out the comment of the week, which also shares the prize of nothing (for now) but might have a real prize later, so start kissing her ass!

Per Vange – the comment of the week was from Julie from Momspective who said in the Rod Stewart thread:

I actually enjoyed this string of comments more than most Rod Stewart songs I’ve heard. I also enjoy some of his songs, so this is actually a compliment as opposed to an insult.

Congrats to Julie!  When we have prizes that don’t involve food we didn’t finish or clothes we haven’t washed we will make sure that the Comment of the Week gets one!

Video after the jump!