“poker players are beyond white trash” 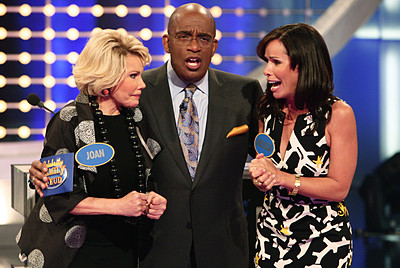 I'm certainly a little disappointed in myself for going with a Rivers image here instead of Brande. Don't call me on it.

Joan dropped that gem on Annie Duke before heading out the door. No, Joan was not fired. She just, you know, played the sore loser card heavily.

I’m always conflicted about when to put the more tag in and get people to read further. This is all spoilers and what not, but I’m OK with being the asshole that spoils, it, but still, let’s get to chatting about the Rivers craziness after the jump…


Kind of lame if Melissa got fired because she would likely raise the least money for charity. Thought this was about the competition, not that silliness. It seemed like that was why she got the boot, could be wrong. Brande got pretty fired up there, hadn’t really seen that side of her. Both in the boardroom and then when Joan was calling her a dumb blonde.

Joan walking out was ridiculous…although, I have to think a lot of that with the Rivers broads was faked. I mean, that can’t be that childish can they? I know they got to keep up the image of being crazy and what not, but they aren’t crazy, are they?

The best thing about this show is not just how Melissa Rivers flakes out, but how pissy she gets whenever anyone else gets chosen to write something like Annie with the presentation tonight.

Sore loser antics aside, Joan brought it fairly strong with the lines this episode. I usually don’t find her all that funny, but I think her line, “this sounds like my first marriage” when Clint and Jesse argued was really good.

Speaking of that, Jesse’s whole PMSng this week was fairly weird. All give and no take and then pouting about it afterward. Probably would have gotten canned if they went into the boardroom. He ramped up the douchebag nature of his personality quite a bit this week and managed to turn Clint, of all people, into a sympathetic character.

Joan will be back next week, just she’ll make some big grand entrance and comment about Annie being a snake and how shameful it was Melissa got the boot. These bitches are crazy. They aren’t going to give up on attention.