How Would Presidential Candidates Handle a Zombie Apocalypse? 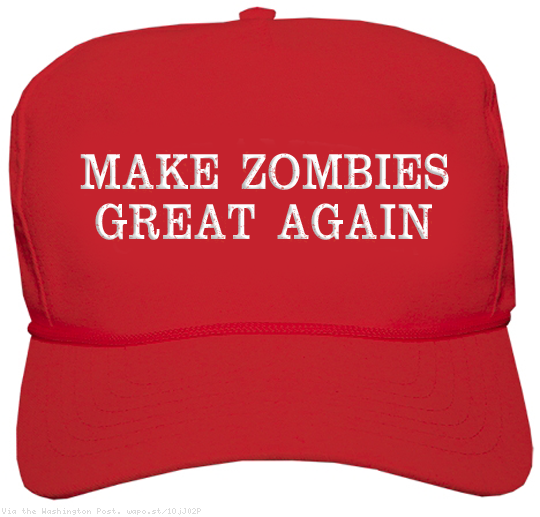 We ask important questions on Allegedly on the Issues. With The Walking Dead season finale this coming Sunday, we decided to have a discussion about how the Presidential candidates would do in a Zombie Apocalypse. Would they do well? Probably not. Politicians rely too much on others.

The above link is to an episode of the podcast that is a bonus to Episode 5 of the Allegedly On The Issues Politics Podcast. Doug and Jared release a new podcast every Monday morning. The first 7 and a half minutes of this is taken directly from the podcast, but, we chatted for another 10 minutes on this issue for this Bonus Podcast.

Why this issue? Maybe because The Walking Dead season finale takes place Sunday night, and, well, you take inspiration where you can get it.

Or, maybe this is an important issue.

I mean, what would happen if Donald Trump was President and a Zombie Apocalypse took place? Die quickly, right? Trump can’t handle a horde of zombies, and in a Zombie Apocalypse, there’s no way anyone is hanging around to save Trump.

But, then again, maybe Trump would make Zombies GREAT again.

Issues Covered on the Zombie Edition of the Allegedly On the Issues Podcast:

You can also find the link to the full Audio of Episode 5 of the Allegedly on the Issues Podcast in the player below.

This week on the podcast, we discussed Bernie Sanders and his possibilities after his wins out west, the Cuban Mistress Crisis on the Republican side, as well as terrorism after the attacks in Brussels and Pakistan.

We also deliver a Top 5 for Movie Line Threats Ted Cruz should have used when addressing Donald Trump’s insults to his wife, Heidi Cruz.