Pujols Bails Some Sucker (President) Out 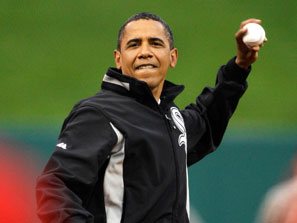 Major League Baseball’s All-Star game was last night and one of the big plot-lines coming in was whether President Obama would throw a good opening pitch. Okay, it was a lame plot-line, but, really, all-star games are rather boring. His pitch? Well, he made it to the plate in the air, allegedly.

Why allegedly? Why is controversy about this ensuing as if this post was guest-written by Sean Hannity? Well, Pujols, who was receiving the pitch, had to reach forward quite a bit to prevent the ball from bouncing its way up there.

As for the rest of the All-Star game? Short. Two and a half hours. The pregame stuff went about 50 minutes, so, yeah, this thing rolled along. Not too much offense, some good defense, some bad defense. Not too much to it. Carl Crawford, he of the mentioned good defense, got the MVP of the game award for robbing Brad Hawpe of a home run with some slick glove work.

Let’s get back to some real baseball. Some of us have fantasy leagues to lose.