Racial Profiling is not OK, kids, but do it nonetheless 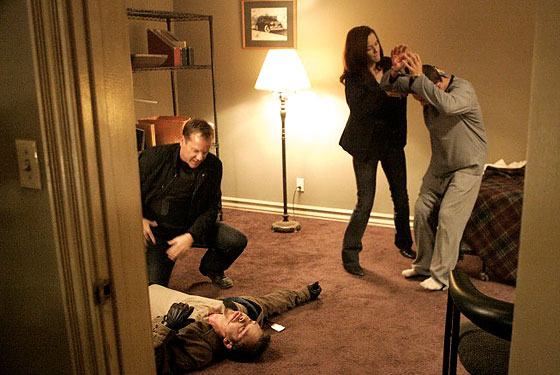 you think jack is not going to save this dude he needs information from?

So, minutes into last night’s episode of 24, Bauer says he wants all Muslim’s in the DC area checked out. Janeane Garafalo was apparently not put off by her be yelled at last week that she tells Bauer this is racial profiling. Jack says he knows that it was racial profiling, but has to do it nonetheless because there is no better way to do it. He proceeds to racially profile.

The New Jersey State Police DVRd this episode and will show it to new recruits and also re-write their manuals accordingly.

24 is making all the Muslims this year good and Bauer even apologizing for their actions towards one of them. Which, is probably a good way to go given their past, “man we don’t give a fuck if some Muslims thinks this show portrays them in a bad light as terrorists” attitude they seemingly had.

Jack puts a gun to Tony’s head next week. Should be fantastic.