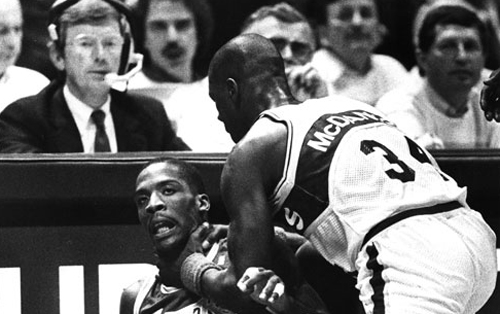 Why did I not use a Celtics or Bulls picture? Because Xavier McDaniel is the baddest motherfucker who ever walked onto a court.

Well, the watching a show and talking about it at the same time went so well last week that we are doing it again.  But this time, we are going to be watching Game 7 of the Celtics / Bulls game.  Tomorrow night at 8PM EST – we will be watching t game and discussing it in the comments.  So if you are going to be watching anyway, you may as well come over and talk shit.  I heard that Barack Obama is going to be posting.  I was going to invite Ted Kennedy, too, but then I thought it would be mean.  But then I thought it would be funny so I called him.  Didn’t hear back.

But anyway – tomorrow night, there will be real time discussion of the game.  And if it starts sucking,  we can talk about hot Jenny from History class.  Ohhh Jenny.  Probably the President won’t stick around for that.  But he might.  Anyway – you are invited.  Wear something nice.  Like those sweatpants with the snaps that come off all at once.