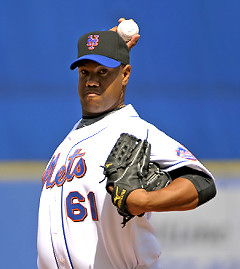 I never really expect the day where I’m going to defend the New York Mets. It takes a lot of stupidity to get me to do that.

Like most baseball fans, I know of but don’t read Rob Neyer articles on ESPN. Rob Neyer is awful. He has, however, been writing on ESPN.com for something like three decades, so it’s nearly impossible to be a baseball fan and have not read quite a bit of Rob Neyer.

I love the whole new stats era the last decade of baseball has seen. Neyer’s articles generally make me think, you know, going back to picking dudes that look like they can hit a country mile or run really fast might not be such a bad idea.

In short, stats are great. However, if you’re awful at interpreting the stats, what are you left with? Really shitty analysis.

I’m not entirely sure why this column set me off when I saw it. But, it seems to sum up everything that is awful about Neyer’s work in a short compact place. Bold is Neyer’s writing.

Really, New York Mets? Livan Hernandez wasn’t good enough to pitch for the Twins or the Mets last year, but he’s really good enough to start every five days for your $149 million team? Yes, his ERA is currently hovering a few hundredths below 5 … but you must know that can’t last, right?

Right off the bat, you’re wondering if Rob Neyer watches any of these teams play or even peeks at their rosters and depth chart. It’s very pleasing that his most egregious work is up front and center so most people can click away or realize they want to enjoy a train wreck.

The thing that is best about this is that in his next blog post, Neyer comments how Carl Pavano is not among the problems for the Cleveland Indians. Point is, teams need bodies when it comes to pitching. If the Mets make the postseason, Hernandez won’t be pitching for them. Hell, he might not pitch for them in July. Right now, it is May, however.

I’m just curious, but, is the theme of this post officially, any team should just go out and add whoever they need whenever? Schafer might not be ready for the majors, but their OF is terrible, why not play Schafer?

Really, Philadelphia Phillies? You’re really going to keep splitting the catching duties between right-handed hitters Carlos Ruiz and Chris Coste, even though Coste has proved beyond a shadow of a doubt that he’s the far superior hitter? Maybe there’s not much to be done about the struggles of Joe Blanton, Jamie Moyer, and Brad Lidge. But giving more plate appearances to the better hitter doesn’t seem all that hard to figure out.

This one, I love.

First, you have the error in valuing hitting so much over the impact of fielding or handling pitchers. Ruiz clearly was better in that regard last season.

Second, the idea that Coste is a “far superior hitter” is absurd. And Neyer takes it a step further by saying that this was shown “beyond a shadow of a doubt.” Really? Has it been? Coste had one hot streak 3 and a half years ago. The last two seasons he was mediocre.

Coste right now is hitting as poorly as Ruiz did last season and Ruiz looks to have improved at the plate. Coste shouldn’t even be on a major league roster right now, yet the Phillies are going to help solve their problems by playing this guy?

Really, Florida Marlins? We all fell in love with Emilio Bonifacio during that magical first week, but are you really going to keep playing him at third base every day, even though he’s done almost nothing since the middle of April?

Ah, yeah. I guess this is the column where teams can magically add whoever, whenever.

Their other option at third base is Wes Helms.

Sorry if I’m not shocked their sticking with the player with the better glove, more speed and more potential.

Really, Chicago Cubs? You’re really not ready to give up on Derrek Lee, while Micah Hoffpauir (mostly) rides the bench and young Jake Fox rots away in Iowa? Have you really not looked at Lee’s lousy numbers since April of last year?

This is one of the few times where Neyer actually has a solution ready to a REALLY??? though.

Really, Pittsburgh Pirates? You’re really going to keep using Matt Capps in key spots, even though whatever was wrong with his elbow a few weeks ago doesn’t seem to have magically fixed itself? Capps has now walked eight batters in 14 innings after walking only five in 54 innings last year. Really.

Yeah, because the Pirates have so many options for key spots. Who else is going to close for the Pirates?

Really, Los Angeles Dodgers? You’re really not going to even think about your next shortstop, even though your current shortstop isn’t hitting or running or fielding like a major leaguer this spring?

The current shortstop he doesn’t mention is Rafael Furcal. Admittedly, Furcal is terrible right now. Again, though, it’s May and the dude is coming off a year where he played only like 40 games due to injury. I mean, you really think they haven’t had a “what if Rafael doesn’t come around?” type of conversation?

This thing was a debacle. Left out a couple of teams where he might have been right about some of the things teams are doing wrong, but it’s like the boy who cried wolf.

I get the concept. Pick at flaws and things you can’t understand why a team is doing. The execution was just a clusterfuck, however.