Red Dawn gets some casting 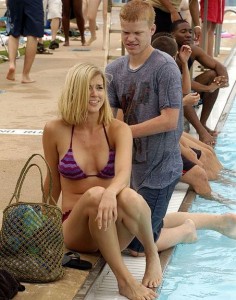 “Friday Night Lights” star Adrianne Palicki and Josh Peck, who has appeared in Nickelodeon’s “Drake & Josh” (as Josh) and in “Drillbit Taylor” have signed on to star in the remake of the invasion U.S.A. film “Red Dawn.”

No clue who the dude playing the Charlie Sheen role is, but then again, the Sheen role wasn’t a huge factor back then. However, I like the casting of Tyra from Friday Night Lights. Hell, I would go ahead and just cast the rest of the chicks from FNL. But, I would make the one that Jeter was dating part of the commies trying to take over the small Colorado town.

That is one thing the original lacked: a vixen on the evil side. I mean, you figure they have all these WOOOOOLVERINES!!!! up in the mountains killing commies and they are thinking of ways to lure them out. The main thing the commies did was to kill people in the town or get one of the Wolverines to betray the rest. Those are tried and true methods of luring someone out of hiding, but really, if the remake had Minka Kelly trying to lure them out? Them kids are out the damn mountains and getting seduced right into the arms of some commies.