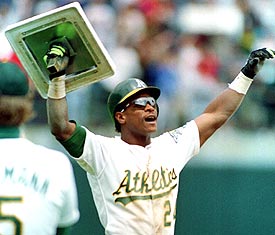 Rickey Henderson was inducted to the MLB Hall of Fame yesterday. Of course he looked dapper. Of course he cracked jokes in his speech. Of course he said he was the greatest. He also told this tale of making all sorts of cash money in his first ten days of high school baseball.

Damn right. Do the math on that action. Bigger story was that every SEC football coach is lamenting the fact that Rickey could be paid off with change. They’re paying off millions of dollars to athletes for ten days of work, Rickey is making $22.

Dude could steal a base, straight up.