RIP Maitland – Nothing is Funny Anymore 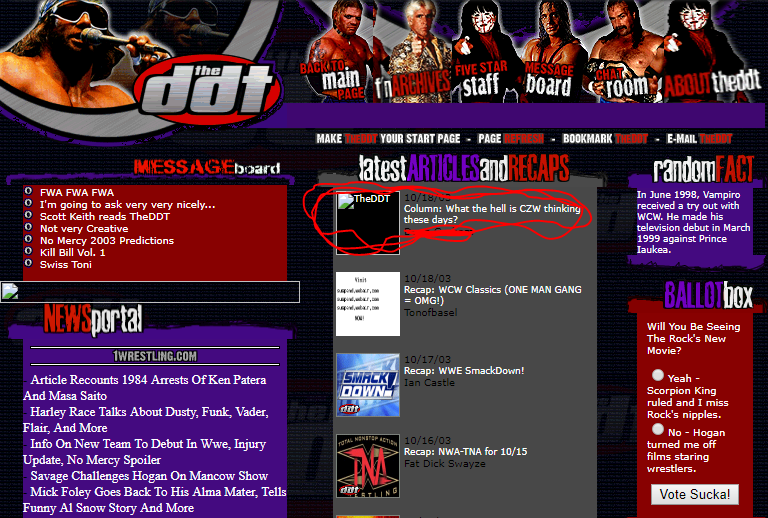 Way back in 2003 I met a guy named Doug. He was one of a million funny people on a wrestling website. He was actually one of three guys who ran it. It looked like this, and the most recent post that day was his.

Looks good for 2003, right? They had a ton of people writing, a really busy forum and constant conversation. I have no idea what it was built in. There was no WordPress back then. And I am pretty sure they never made a dime. But goddamn it was fun.

15 years later. Him graduating college later. A million posts later. Him graduating law school later. A billion AIM / Google / Whatsapp chats later. A trillion ideas about jokes, sites, books, podcasts and ridiculous-text-based-online-gangster-game strategies later. An infinite number of times Doug and I would fall in and out of touch but never all the way out later – he died. I don’t know a lot more than that. I know the last time I talked to him was this:

It was not the first novel he wrote. He never stopped writing and he was funny. I am sure someone will help me figure out how to show you his posts here. But for now you can go to the site he started just because he had ideas of funny posts about Trump.

And because he was Doug, it was big. And intricate. Funny idea about what if Trump shot Jim Comey? Well it would be funner if it was in the form of a Don Lemon CNN panel featuring this group:

Rick Santorum: If I can jump in here for a second. Mr. Trump has done a lot of great for the country. This one moment is not something that should define him. We have to also remember, this is a man, James Comey who once leaked a memo he wrote to a friend and that man leaked that memo to the media. So, I think, once you start putting everything in perspective, was Mr. Trump justified? I think so.

What Would Happen If Donald Trump DID Shoot James Comey?

From what I know, Doug died after playing basketball last Saturday. I hadn’t gotten the script pages yet but even though he said “tomorrow” it meant “at some point fairly soon”. But now I know they aren’t coming but I don’t BELIEVE they aren’t coming because Doug was only 36 fucking years old. That is not when you die from some fucking heart problem after playing basketball.

We never actually met. I always assumed I would go to his wedding if he had one.

He was the funniest writer I had even if he only showed up with the same frequency as a comet. He was the only one on staff that I think Vange actually wanted to beat up. He pushed her buttons like nobody else.

But since I had known him longer than anyone else on the Internet, as Doug, as Silky Johnson, as Buff Bagwell in a giant top hat, as Maitland, he was always grandfathered into whatever scheme I had in play. And I in his.

He even got me to play that goddamned gangster game again last year, like I had time for that.

But I made the time. It was Doug.

I’m pretty sure he became a lawyer because arguing and negotiating were his two favorite past times. And he usually got what he wanted.

He and I discussed the relative benefits of running blogs (fuck, that word is gross) in a post Facebook world. We sort of came to the conclusion that there were very few. Is it funny if you don’t hear anyone laugh?

And thinking about it over the past 24 hours (a friend from the gangster game tracked me down last night to tell me, he’s a wonderful guy) us staying in touch now makes all the sense in the world.

Right before he told me he was sending those pages, he had popped up to tell me nice newsletter. He had gotten it in his email. You may have, too.

We stayed in touch because we were fans of each other’s stuff. Yeah we were friends. But he also knew I would tell him if an idea was funny or not and same with him for me. Sometimes we would have long conversations and dissect things but final sign-off was expressed with: ‘Nice’.

I mentioned how he loved to negotiate. Well the past few months I’ve been working on podcast script that is kicking my ass. And I needed him because he was a defense attorney. I told him he needed to read parts of a book.

He said no way was he doing that and I said yes you are. He said why would I do that?

I said: because I have gone along with everything you have cooked up almost without even questioning it for more than 10 years.

He said: That’s true. OK Tell me exactly what pages you want me to read. Is this going to be the whole show? I told him no, it was three parts but I only needed him for this part. I explained the rest and we discussed it a lot and it ended with him saying: Nice.

And now I get why I’ve been crying about losing a guy I could not identify in a fucking photograph.

If we had big ideas we always ran them past each other. I genuinely never realized that until just now.

We gave a shit about our projects. And I’m not going to say that either of us liked pouring our hearts into things and trying to come up with an algorithm of page views to silent laughs.

We both knew that even if nobody else gave a shit, at least we did. So nothing we wrote was ever for nothing. Until now, anyway.

Doug is dead and I won’t know what’s funny anymore and the only positive things I can pull out of this shit situation where a young man dies for no reason is realizing the function we served for each other all this time and that the last thing he talked to me about was something he was working on. And the last thing I ever said to him was: Nice.