Robert Bodden Reviews John Carter – Or the other way around? Who knows? 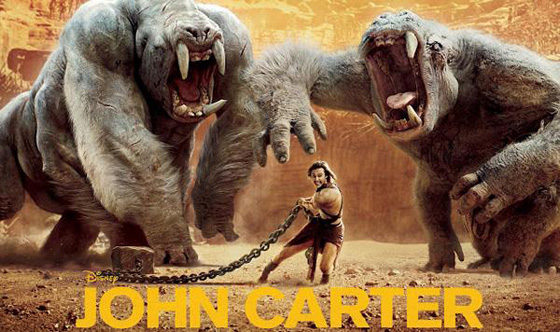 Editor’s note – Robert Bodden is working his butt of on everything except putting titles on his posts.  So when I go in and look at the posts I miss it.  So I will punish him by giving his posts goobery names.  Only you can help him!

I’ll start off by admitting I have never read a single book in the Barsoom series by Edgar Rice Burroghs. I will also admit I don’t actually enjoy reading hard science fiction or fantasy novels. I like sci-fi set in modern times that are more in the techno thriller genre. After seeing John Carter, I am still not sure if I want to read the novel or not but damn the movie was freaking awesome!

I’m not sure what the marketing people at Disney were thinking. The trailers for John Carter all made me think “meh”. It looked like it might be a good time waster. I was wrong. John Carter actually has a story, a good story hidden amongst all the visual effects and action scenes.

John Carter has everything you could want from a movie: action, romance, humor and thrills. It also has a nice twist at the end that I didn’t see coming. Well, I saw a twist coming I was just wrong about what it would be. If you strip away the action and great special effects you are left with a fairly good love story. It’s a bit predictable but the the actors more than make up for it with strong performances and an actual sense of fun. Between scenes of political intrigue, struggles of martian clan domination and developing love interests we get to see John Carter grow from a man mourning his lost family to a man fighting for freedom and a new found love. He goes from wanting to get back home to finding a new one.

I saw the movie in IMAX 3D and I have to say the 3D was handled very well. If you can catch it in IMAX I say go for it. If not, go for it still. For a story that was first published in 1912, John Carter is an extremely entertaining flick that offers much more than what the dull trailers would have you believe.