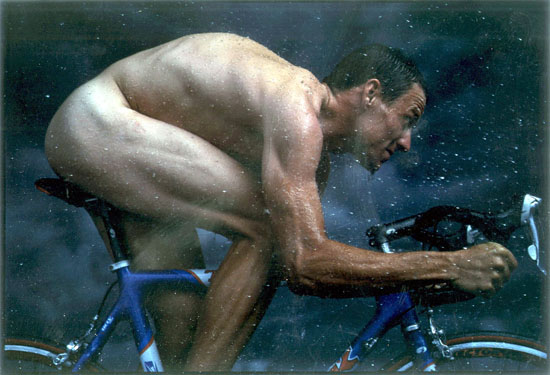 This was one hell of a photo shoot.

The only time I care about the Tour de France is when Lance Armstrong is competing.  I used to bike and I know the crazy demands it puts on your body and I was (obviously) never even near his league.  Lance Armstrong is a fucking machine.  They used to call Vinnie Johnson The Microwave because he heats up fast and turns off just as quickly.  Using that criteria, I wonder if Armstrong should be called The Kiln or something.  I read once that in all the trials and tests they have done on his body that he doesn’t produce lactic acid to any appreciable amount.  That’s astounding to me.

There are few people I truly admire, truly hold in awe but Lance Armstrong is one of them.  The strength of character and will he has displayed throughout his life is absolutely inspiring to me.  His sheer determination, the “never give in” attitude is so ballsy (yes, I said that on purpose) that he deserves the veneration and reverence he receives.  I don’t give a rat’s ass about his love life; to me, he is an athlete only.  The celebrity prying gossipy crap doesn’t matter a bit. He is currently in third place.  Just do it, Lance.

His Nike ads are the best I’ve ever seen and I put a few of my faves in after the jump.