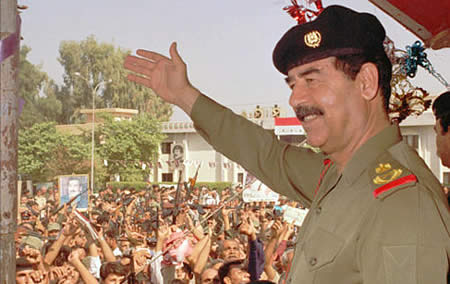 Got this in my email.  It’s probably fake.  But if it isn’t it is the kind of thing I would do if I were a king.  I would be making all sorts of shit out of gold.  Remote Controls.  Hammers.  Dogs.  Having a gold robot dog would probably be the pinnacle of coolness.  Now, I realize that Saddam was a terrible dictator and not a king.  But I’m not gonna be like that.  I am gonna be elected king.  It’s a subtle but important difference.  My subjects (you) would forgive my eccentricities because I make sure that they have plenty of corn and car racing.  And other countries would envy our Gross Domestic Product.

Now, you can go look at the guns that Saddam supposedly really made or you can look at the pictures and say: King Acadia’s Golden Robot Dog is way better than that.  Let’s hang up another picture of him.