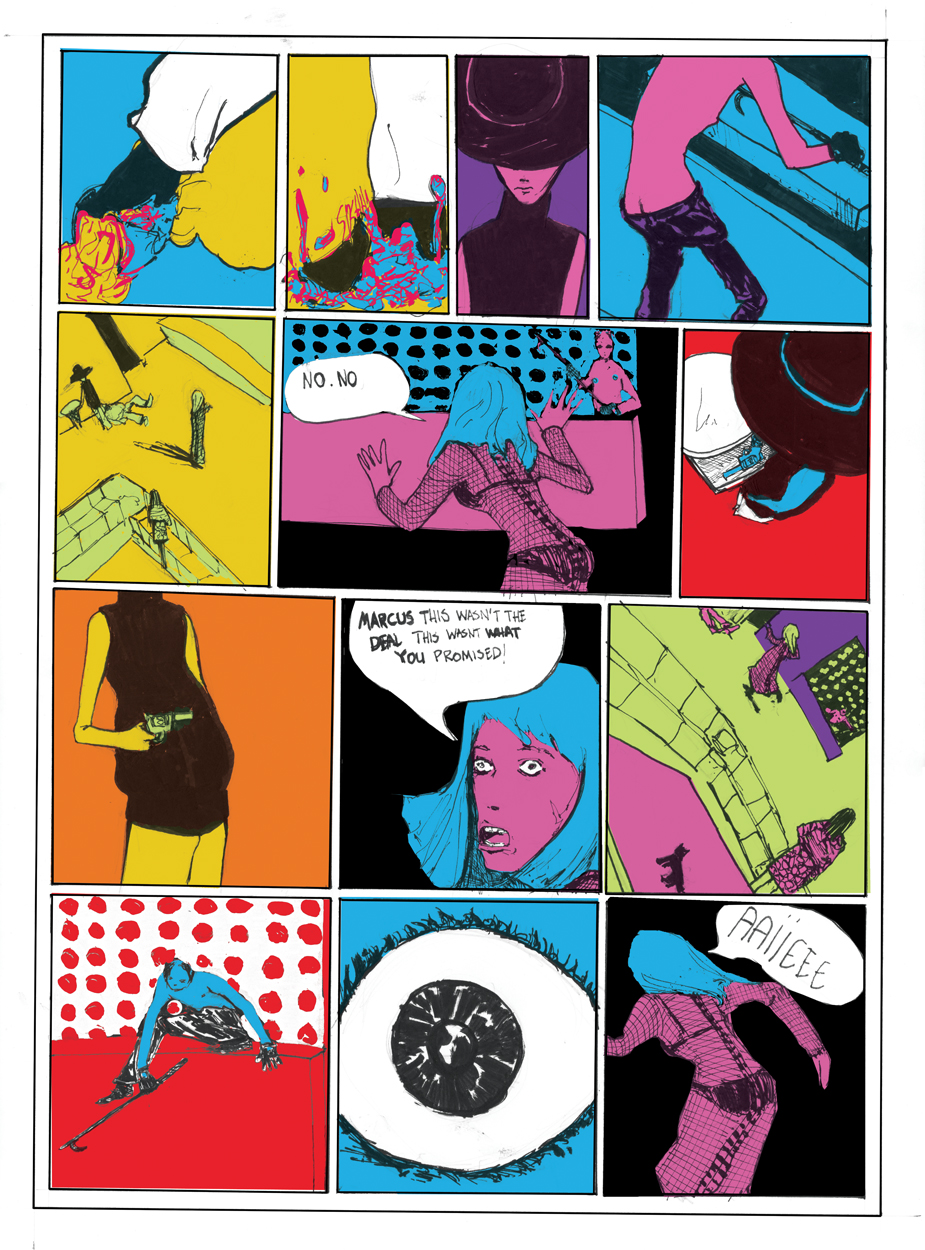 I’m super excited to post the second part of this interview with Sarah Horrocks, a very talented writer and artist who we found in the sometimes terrible but sometimes wonderful world of Twitter. She was kind enough to take a lot of time answering a bunch of questions about her art, life, and interests, and she’s for real wicked talented, so please read this and then go look at and buy all her stuff and tell the whole internet about her! Thanks, friends.

What is it about comics, specifically, that you think drew you to it? Not only your art but also the critical writing you’ve done. What are your favorite comics to read?

The magic between panels. Like I said before, I grew up reading a lot, so like in a book-book the whole thing is powered in your head–a comic is a little faster than that, because you are given the images, but because of that, there is a depth of visual information that you are animating that can surpass the novel. Not because you can’t literally describe everything in a scene–but it’s one thing for me to write everything that is in a Schiele painting (naked guy), but I can’t put into words what that image actually is. Images are beyond words. And so comics traffic in the sublime of the image, but it’s mapped onto the magic of narrative and reading, that makes it more addicting than crack. One of my favorite comic book artists is Daisuke Igarashi, and I can’t explain him to people by taking a picture of a panel of his work. While it’s true he has some beautiful images, it’s not until you are spellbound by the language of his line, and enmeshed in the world his pen creates, that you can understand how truly beautiful and profound those images actually are. So comics work two ways, one way is they contain the singular sublime images that you can extract and change your life around, but two they have these hidden images between the panels–there’s a world that exists between your mind and two panels that is beyond description, and for me is a drug more powerful than any other medium. Film and the novel are both formats that are on either side of the comic, but neither can encapsulate it.

So my favorite comics are Daisuke Igarashi comics, Guido Crepax, Alberto Breccia, Blutch, Bill Sienkiewicz, Inio Asano. My favorite comics of all time are Goodnight Punpun by Inio Asano, Children of the Sea by Daisuke Igarashi, Ping-Pong by Taiyo Matsumoto, Perramus by Juan Sasturain and Alberto Breccia, Elektra Assassin by Frank Miller and Bill Sienkiewicz, Abara by Tsutomu Nihei, Salammbo by Druillet, Saga De Xam by Jean Rollin and Nicolas Devil, Helter Skelter by Kyoko Okazaki, River’s Edge by Kyoko Okazaki, Bianca by Gudio Crepax, Emmanuelle by Guido Crepax, Dracula by Guido Crepax, the Jose Gonzalez Vampirella comics. There are a lot more, I was just going by what was around my desk and off the top of my head. 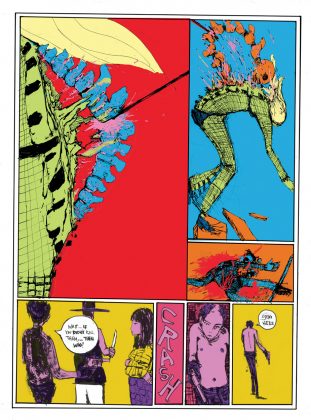 Can you tell us a little bit about your comic The Leopard? What inspired you to create it?

I love the aesthetic of Giallo movies, and there are like…f*** all slasher comics out there, let alone cool Giallo inspired ones, so I was like “well, I guess I have to do this myself”–I also wanted to do a story where a family just eats itself. So the Leopard is my Giallo comic basically. It’s about this family that goes to this island because their mother has died, and she is leaving a healthy inheritance. They start killing each other because they are s*** people who hate each other beyond the ability of words. And so the comic is like – if you combined all of the “I f***ing hate you” of Ingmar Bergman with the body count of Mario Bava with over the top Fulci type gore you’d get The Leopard. But because it’s drawn and colored by me, it looks completely alien to what you’d think a comic like that would even look like. I didn’t learn to draw looking at like…Jim Lee or Fort Thunder, I learned from Schiele, Tsutomu Nihei, Taiyo Matsumoto, Guido Crepax, and Alberto Breccia. And I learned to color from trash movies, Brendan McCarthy, Guy Peellaert and elektra assassin. So my s*** is weird. But I think if people roll with it, the experience is singular and always improving.

I notice that you are also an animal lover, and we’re big fans of animals here at The Gallery. I’d rather live on an island with dogs and cats and assorted other adorable babies than be around human beings most days. What pets or fosters do you currently have in your home?

Two salukis which are these big dragon dogs. A rescue cat named Meiko. And we just got a new puppy which is a Belgian Tervuren. Which is like…a wolf dog. I grew up with tervs, but this is the first one we’ve had in awhile. She’s pretty fun. My mom does work for the national terv club, so I think she’s planning to show the puppy. So model-esque show puppy, basically. Too cute.

Do you find that it’s difficult to structure your time, working independently as you do? i.e. do you find “work” creeping into what should be relaxing time, are you bad at meeting deadlines, or do you have ways to manage yourself? (Asking for a friend… the friend is me because I’m horrific at meeting any self-imposed deadlines.)

Not at all. The day job helps. I usually get home from the day job like 8 or 9. Take a nap till about 2 or 3am. Work on comics till 8 or 9am. Get in another 4-6 hour nap, and then go to the day job. Cycle repeat. I always give myself the evening when I get back from work to just enjoy. And I usually will watch a movie per day sometimes, and that’s just like either before i go to sleep or right when I wake up like how most people would do coffee. And then I just kind of tweak that schedule depending on how I need to. Comics are fun because it’s really just scheduling. If you do enough little things every day, eventually it becomes a big thing. Brandon Graham once told me that so long as you get like even a panel done each day, that’s progress and it counts. Which sounds silly, but when you’re in it, it’s really not. You really just have to stay hungry, and keep pushing.

As a trans artist, how do you think your experiences inform your art? Tell us some other great trans comics artists we can follow and admire so we can be less ignorant.

I mean I’ve made a lot of comics ABOUT my experience as a transwoman, and the leopard has a transwoman dealing with transphobia in it. I think the way that I draw comes from my body dysmorphia. There’s a lot of anxiety when I draw the body, and I think that comes through in my line. That’s why someone like Schiele was such a revelation for me, because I instantly related to that tension with the body. He painted how I feel everyday. Everyday I feel like there’s some point of it where I want to crawl out of my own skin. I want to get it into my comics what it’s like for me to feel so suffocated because of how society views my body, and this discord between what I know that I’m worth and what I deserve, and how society views me as almost the bottom rung. The only reason I’m not the complete bottom rung is because I’m also a white transwoman. Which is probably the only reason I haven’t been killed too. The rung below this one is where they beat and kill all of the transwomen. It’s probably also the only reason I could get the shit job that I’m extremely over qualified for. So there’s an anger too there. I think it’s as universal as something anyone who knows they are made to feel less than for things that actually make them beautiful. But also specific to specific transgender horrors. But it has also made me fearless. Everyday is me just being me, and the world has made that such a s***ty thing, that I can’t help but do everything with my time toward exactly what I want to do.

Jeffrey Catherine Jones is dope. Sophie Campbell is cool. I like Tessa Black a lot. She had a comic In The Island which was legit one of the best comics of last year. So…Tessa is probably my favorite living artist who is also transgender.