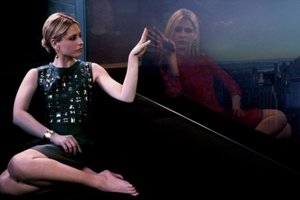 Or maybe we just love Buffy.  Hmm.  Well.  If I think about what she has done since then (including marrying Freddie Prinze Jr.!) I guess maybe we just love Buffy.  And while she is classy enough to wear shorts and not show everyone on the sidewalk her Hellmouth when she knows she is getting out of a car, she still looks sort of angry and drunk.  And since she has a show to promote she needs to look happy!  And why is she doing a show with Robin Williams?  She is young, right?  People will think she is an old crapper.  I think she needs to look at scripts and say:  “for the next three years, if I am not running at some point in this script, I am out.”  Hopefully she spends some times in her new show running either away from or after Robin Williams.

As for the angry drunk picture, I hope she got angry because she realized that she was married to Freddie Prinze Jr. and got drunk so she would have enough gumption to call Joss Whedon and ask him to bring Buffy back.  Seriously.  Other than Allison Hannigan, what are the rest of them doing?  Staring at the phone and being excited if it is SyFy?

Put this together, people.  We want sober happy SMG back.  Or drunk happy SMG.  The drunk is sort of ok.