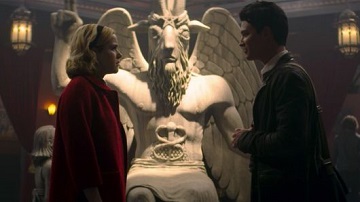 Netflix’s new series “The Chilling Adventures of Sabrina” has been the talk of the town since its debut. Many have enjoyed a darker side of the beloved Sabrina Spellman. First made popular in the late 90’s by Melissa Joan Hart, Sabrina is a teenage witch just trying to make it in a muggle world. However,  Netflix and Warner Brothers both find themselves in hot water with a pending lawsuit from The Satanic Temple. TST claims both companies have compromised their integrity by falsely representing their core values. They feel the series inaccurately depicts satanism as evil and dark.

According to the organization, TST “does not promote evil and instead holds to the basic principle that undue suffering is bad.” A statue of Baphomet, described as “an androgynous goat-headed diety”, is at the heart of the controversy. TST claims the Netflix series has infringed on its copyrights by using a depiction of Baphomet as evil. As a result, the organization feels they have now become associated with necromancy, murder and torture and cannibalism.

The Satanic Temple is suing for $150 million in damages and have asked both companies to discontinue the use of Baphomet in the series. Warner Brothers and Netflix have not commented on the lawsuit. Satanists have been coming to their defense since popular shows have been accused of portraying them in a negative light. Recently, the popular FX show “American Horror Story” came under fire after an unfavorable portrayal of The Church of Satan.