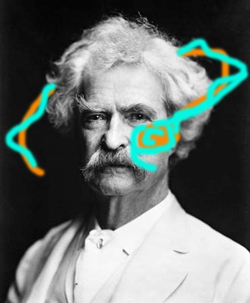 I am sure there are a lot of other people who were born and died under the comet.  Especially in 1835.  Babies probably died all the time from leeches and wild boars and the fact that people hadn’t invented washing their hands yet.  But not many people managed to make it for one whole cycle before they kicked it.  And if the comet wanted Twain dead, I bet he was mad he missed him the first time.  I muttering all that time as it was flying through space like a really fast Voldemort.  “I’ll get that bastard, Twain!” I bet he said.  And get him he did.  Never bet on a wise author and renowned humorist in a fight with a giant ice ball from space, folks!