Sci-Fi Original Movies – How Hard Can It Be? 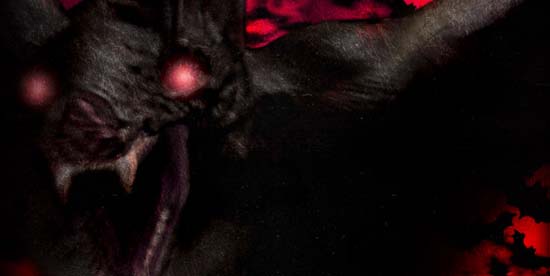 I know you all probably watch the Sci-Fi Channel once in a while.  I used to think I did, too.  But now I realize I watch it a lot.  A lot.  And not just Balltestar Galactica (ohhh Boomer).  Or Ghost Hunters (ohhh why don’t you wear cameras on your heads you assholes).  Or Estate of Panic (ohhh girl with big boobs who lost in the finals).

No, I watch Sci-Fi Original Movies.  Now, mind you, I only watch the sword and wizard ones.  But they really have something for everyone.  See that pic up there?  That’s from: Bats: Human Harvest.  I am so gonna use that pic for the Batcave somehow.  But anyway.  The tagline for this move was:

How hard could it have been to come up with the plot around that tagline?  I mean, I think they all sit around a table thinking up taglines and then make a movie about them.  Those sentences don’t even need to apply to bats.  It could be wolves or barravudas or eagles.  But nope.  THey did bats.

Now, if you got that right, then start coming up with a movie in the comments.  You can contribute a name (use lots of colons, it’s cooler that way), a tagline (i.e. This time, the Indians have cannons.) or a cast member with their part (and David Ogden Stiers as The Prussian Alchemist).  Actually, even if you got it wrong you can still play.  If there are enough good elements, then we can pitch it to Sci-Fi and split the money.  I figure $75.00 split 10 ways makes for a good Christmas.