Seinfeld Reunion on Curb Your Enthusiasm 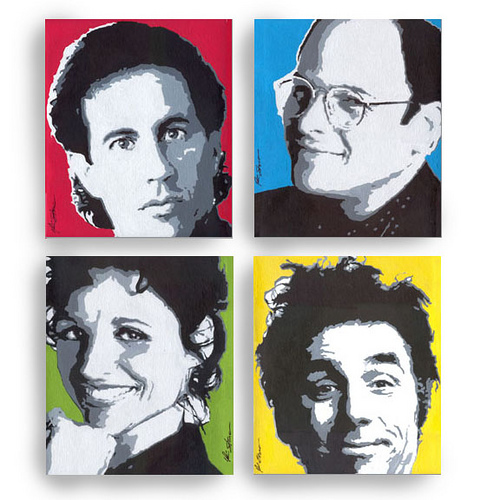 This post doesn’t need me barkin’ words about it to make it more worthwhile.

The “Seinfeld” reunion Larry David swore for a decade would never happen is finally happening — but only within the fictional universe of “Curb Your Enthusiasm.”

The seventh season of David’s improvised HBO comedy, which returns on Sept. 20, will be centered around the TV version of David finally agreeing to do a reunion of the defining ’90s sitcom. All four “Seinfeld” castmembers — Jerry Seinfeld, Jason Alexander, Julia Louis-Dreyfus and Michael Richards — will play themselves in multiple episodes, and the season finale will feature extensive snippets of the show-within-the-show.

I haven’t had HBO for a year, but will certainly consider re-upping for this.

Larry: What’s the guy, 4 years old? He’s got to meet Julia Louis-Dreyfus! What kind of person is that?!
Cheryl: He’s a fan.
Larry: What does he expect to gain from such meeting? What does he think? He’s gonna go over there, she’s gonna be so charmed by him that all of a sudden they’ll start becoming friends? They’ll talk on the phone and go out to dinner together, go to the movies? What, start e-mailing each other? Summer vacations? Is he out of his fucking mind?!