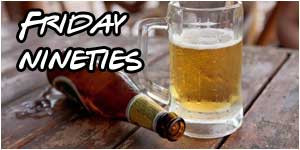 Next week will be the five year anniversary of this column.  I have still never repeated a song.  And this was going to be the week I did it, and on purpose.  Closing Time by Semisonic is as 90s as things get.  It’s from 1998 and the first thing I did was to get ready for this column was to find the original.

Except there isn’t an original.  I never did this song.  Ever.  Not even sure how that is possible.  In fact, I am sort of thinking that since the site is falling down around my ears maybe I DID write it but it fell off somehow, like a side view mirror off of a jalopy when it hits a bump.

But since I can’t prove that I wrote it, I will have to tell you the fun surprise that I know now that I didn’t know five years ago.  And for that, we have to do the video first and then talk more.  Don’t skip ahead.  Just listen to the song.

OK so now what you have listened, you are probably smiling and remembering that it is a fun song and wondering why I am typing under the video which is when I usually stop.  Well, now that you listened to it, you probably wonder about the same three lines that everyone else wonders about as they don’t seem to make any sense.

Now, I am sure you didn’t really think very hard about them, because honestly, does Semisonic think they are better than you, with their lyrics you have to think about?  They aren’t better than you.  This song is about last call and bumbling out into the dark street hoping that you still have your apartment keys and enough money to get both something to eat AND a cab home.  Or at least it was until a friend sent me video below earlier this week and I became a member of that other group.

See, Closing Time listeners are in two groups.  One: the people who think it is about a bar closing and Two: people who have seen the video below and now know what those three lines mean.  Welcome to group two! (start around 3:40 if you are impatient).