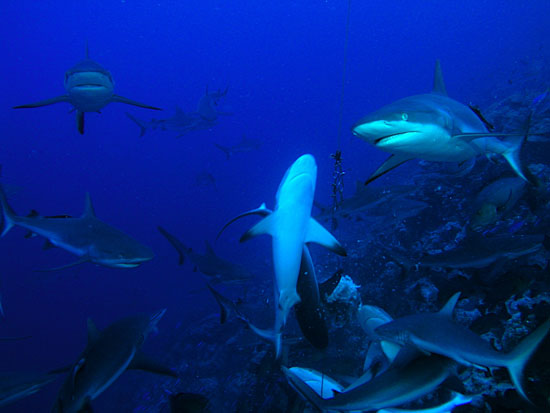 Earlier in the day I mentioned how Shark week was back this week on Discovery Channel. Well, that’s true. Here’s what you should look for other than awesome repeats of AIR JAWS.

You probably missed this. Because Sunday was last night, amazingly enough. But, there was a point in this show where they said, “July 4th”, “busiest day of the year” and then somehow someone did not get eaten. I guess that is what happens when you deal with reality. Because we all know that on the 4th of July Jaws killed a man and then damn near ate up Brody’s son.

The rest of the week schedule after the jump.

“Day of the Shark 2” (Monday, 10 p.m.): Spins shark tales, including the story of a former Navy SEAL attacked in Florida’s waters.

I look forward to “Deadly Waters 2” which is going to come in two years talking about the amount of tourist activity increasing since Stroud’s first visits…which, clearly, would lead to more sharks eating people and jacking up those cages people film from.

“Sharkbite Summer” (Tuesday, 9 p.m.): Chronicles 2001’s “Summer of the Shark,” a series of more than fifty attacks on American beaches.

I am envious of that summer. Seriously, it’s like 75 degrees and cloudy every summer. I’ll take some heat even if it means I might get bit.

My guess? They did it all for that sweet John Williams music.

I hope this is just an hour of sharks lying around getting some REM sleep.