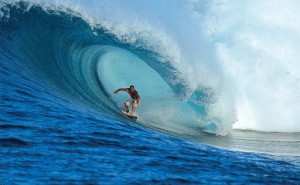 That is Kelly Slater, 9 time ASP Surfing Champion shooting the curl. Nice pic and one of thousands of great shots of this guy surfing over the past 20 years. He is closing in on the tenth championship right now. The guy has ruled surfing for ever it seems. And yet.. I bet you’re asking yourself, who the hell is this guy?

Wait a tick.. You don’t catch surfing on any of the multitude of sports channels? Don’t tell me you are one of those people who think it is just a bunch of long hairs, driving the woodie to the beach, waxing surf boards and playing beach blanket bingo with hotties in bikinis? Right? Dudes and dudettes, put down the bongos and the flowers, man, this is a serious sport.

I have been to Cali and to FLA and I have tried surfing, it is hard. Wannabes like me need about two years of intense training and coaching before they would even let you on the beach at Waimea, let alone the Banzai Pipeline on the North Shore.  Yeah man, shooting the pipeline would be groovy but you gotta have the chops. It ain’t easy brother.

Slater is 38 now, shooting for another championship in a sport that favors the young, like the folks with the rock hard 20 something bods who haven’t rode the reef. I mean, 20 years on some killer surf, and I do mean killer. And yet.. the dude keeps dominating guys half his age in a sport that is about as physically demanding as there is.

Here is a fun stat for ya.. he has won over 80% of the tournaments he has entered. Even Tiger Woods has not dominated like that, no one has for that long of time. The sport has its perks, good prize money in the range of 100k for a win, which is a lot of beach time man. There is of course, the hotties too. Slater has dated some of the biggest names around LA his whole career. There was super model Giselle for one, and we can forget Pamela Anderson.. The dude hangs with rock bands and has some pretty good star status around the scene. But, you probably didn’t know that.

Catch the video of some highlights and if you’re feeling particularly froggy, there is a bazillion vids all over the net and you can rock the surf all day long. That’s what I have been doing today.