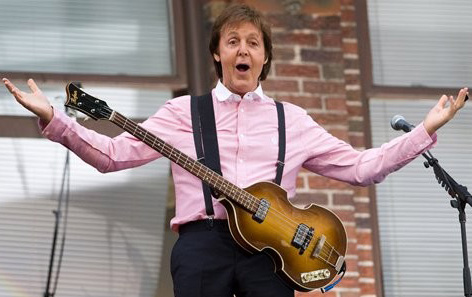 CBS has been touting McCartney’s appearance pretty hard and, even if I didn’t watch Dave every night, I would have tuned in for Sir Paul’s return to the Ed Sullivan theater.  Bruce Willis randomly showed up, as he often does, to do the Top Ten.  The topic was Top Ten Ways Bruce Willis is Spending his Summer and the #1 reason was, “Agreeing to do a lame Top Ten list just so I can meet Paul McCartney.”  It was as cute as everything Bruce Willis does.

The interview was interesting, especially when Dave asked him something about The Beatles’ history and McCartney didn’t know the answer, basically saying there are people out there who know the details of his life better than he does.  He also went into the deal with MJ buying out the catalog and how he refused to do the right thing by the Beatles.  And then said the usual, MJ was an amazing talent, he will be missed and blah de blah blah, he’s dead so we have to say nice things about him now.

And then, to the marquee!!  CBS only had time to air two songs, but he performed an entire mini-concert for a big ass crowd in the street.  When the camera panned, you could see people hanging out of windows in every building.  You could also tell the camera operator was a man as he zoomed in on the boobs bouncing in the crowd as women danced and jumped up and down with the joy of breathing the same air as Paul McFREAKINGCartney.

The performance was pretty solid, the sound crew having done a fantastic job.  It had the best sound for a live performance* I have heard in a long time.  I guess when you’re Sir Paul, you can afford the best.  The absolutely glorious part of the show, for me, was how much fun he looked to be having.  That is always my favorite thing, to see a musician who is clearly having a ball.  And, unless he is a better actor than I have given him credit for being, he had a flipping blast last night, grinning and bopping around, chatting with the band. The joy of performing hasn’t faded nor has he become jaded; it’s still a rush for him.   And for that, if nothing else, I thank him.

You can see the whole thing, even shit CBS didn’t air on Letterman last night, here.

*SNL musical guests suffer the absolute worst sound crew or the acoustics suck or something.  I don’t care why, I just hate it.

Filed under: The Beatles