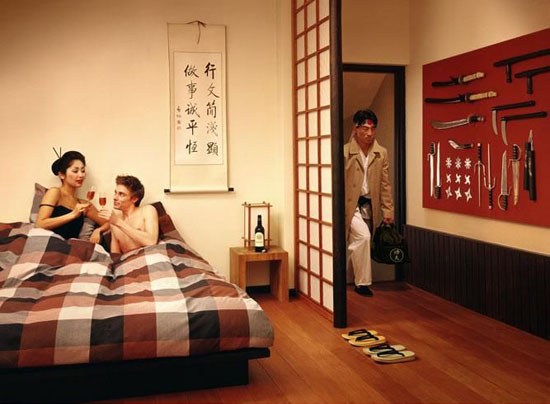 A married man was having an affair with his secretary. One day they went to her place and made love all afternoon. Exhausted, they fell asleep and woke up at 8 PM.  The man hurriedly dressed and told his lover to take his shoes outside and rub them in the grass and dirt.  He put on his shoes and drove home. ”
Where have you been?” his wife demanded.
“I can’t lie to you,” he replied, “I’m having an affair with my secretary.  We had sex all afternoon.”  She looked down at his shoes and said, “You lying bastard! You’ve been playing golf!”

A middle-aged couple had two beautiful daughters but always talked about having a son. They decided to try one last time for the son they always wanted.  The wife got pregnant and delivered a healthy baby boy.  The joyful father rushed to the nursery to see his new son. He was horrified to see the ugliest child he had ever seen.  He told his wife: “There’s no way I can be the father of this baby. Look at the two beautiful daughters I fathered!  Have you been fooling around behind my back?”  The wife smiled sweetly and replied, “Not this time!”

A mortician was working late one night.  He examined the body of Mr. Schwartz, about to be cremated,and made a startling discovery.  Schwartz had the largest private part he had ever  seen!  “I’m sorry Mr. Schwartz,” the mortician commented, “I can’t allow you to be cremated with such an impressive private part. It must be saved for posterity.”  So, he removed it, stuffed it into his briefcase, and took it home.  “I have something to show you won’t believe,” he said to his wife, opening his briefcase.  “My God!” the wife exclaimed, “Schwartz is dead!”

A woman was in bed with her lover when she heard her husband opening the front door.  “Hurry,” she said, “stand in the corner.”  She rubbed baby oil all over him, then dusted him with talcum powder.  “Don’t move until I tell you,” she said, “pretend you’re a statue.”
“What’s this?” the husband inquired as he entered the room.
“Oh it’s a statue,” she replied, “The Smiths bought one and I liked it so I got one for us, too.”
No more was said, not even when they went to bed.  Around 2 AM the husband got up, went to the kitchen and returned with a sandwich and a beer.
“Here,” he said to the statue, have this.  I stood like that for two days at the Smith’s and nobody offered me a damned thing.”

A man walked into a cafe, went to the bar and ordered a beer.
“Certainly, Sir, that’ll be one cent.”
“One Cent?” the man exclaimed. He glanced at the menu and asked, “How much for a nice juicy steak and a bottle of wine?”
“A nickel,” the barman replied.
“A nickel?” exclaimed the man. “Where’s the guy who owns this place?”
The bartender replied, “Upstairs, with my wife.”
The man asked: “What’s he doing upstairs with your wife?”
The bartender replied, “The same thing I’m doing to his business down here.”

Jake was dying. His wife sat at the bedside.  He looked up and said weakly, “I have something I must confess.”
“There’s no need to, ” his wife replied.
“No,” he insisted, “I want to die in peace.  I slept with your sister, your best friend, her best friend, and your mother!”
“I know,” she replied, “Now just rest and let the poison work.”