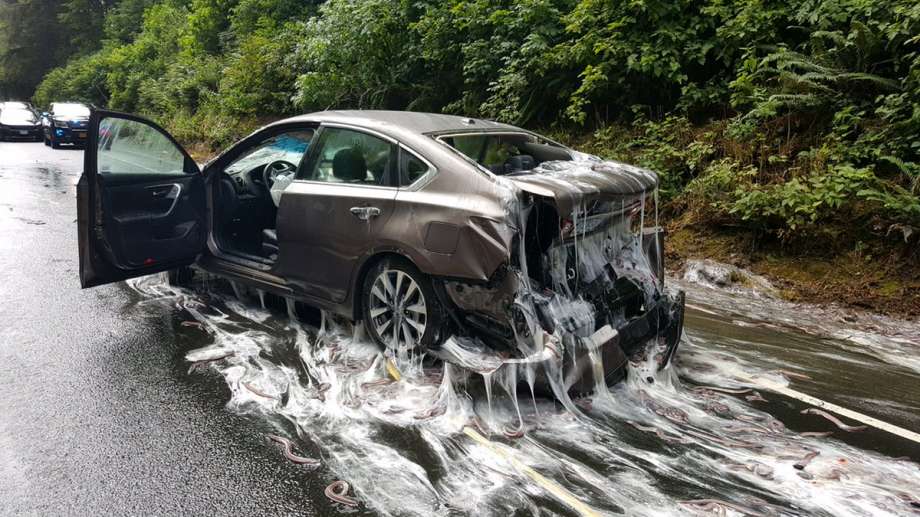 In very real news, as in, “This is a real thing that happened that I totally didn’t make up”, a truckload of Hagfish, colloquially known as ‘slime eels’, overturned near milepost 131 on U.S. 101, on the Oregon Coast due west of Salem, OR.

Hagfish are the “vultures” of the sea. They hang around, waiting for other sea creatures to die, then burrow into the carcass to eat it from the inside out, thus cleaning up all the oceanic “roadkill”. The problem, as you can see in the photo above, is that when captured, their main defense mechanism is to secrete a microfibrous slime.

The virtually blind and eel-like creature, which measures about 30 inches, and which features small tentacles around its jawless mouth and pincher-like teeth on its tongue, is the world’s oldest vertebrate. They have anywhere from 90 to 200 “slime pores” running laterally along the full length of each side of their body. So when threatened or stressed, their strategy is to “shoot a load” of slime at whatever predator is nearby in order to SUFFOCATE IT. The slime is so viscous and effective that a Hagfish left in its own slime will literally suffocate and die.

The snot snakes were being shipped to Korea for consumption, according to police. Hagfish are prized as a delicacy in South Korea, and even considered an aphrodisiac, like most creepy, crawly, wiggly things that make their way to Asia. They’re pretty valuable little…um, “guys”, and there’s a fairly robust industry of capturing them off the Oregon coast (since 1988) and shipping them to Korea.

As of Thursday 7/13, Oregon State Police had not yet said when they expect the road to be clear. (And you thought YOU had some epic “emissions”.)