Some Guy Is Totally Boned 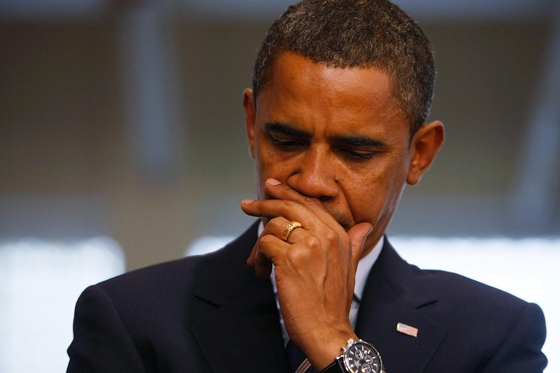 The President was not in the Wal Mart, but was still not amused.

Were you ever sitting at your desk with your back to the door while everyone was waiting for the teacher to come in?  And you were just talking to your friends and not paying attention?  So then when you were busy telling the story about how you tried to piss in a bottle on the way to the big game on Saturday but in the middle of the story the teacher comes in and everyone shuts up instantly.  But you were talking loud enough to be heard when everyone was being noisy so since you are the only one still talking the only thing people hear of your story is, ” SO I PISSED IN MY OWN MOUTH!”

Yeah, so I’m guessing that’s sort of what happened to the dumb fuck at Wal*Mart who caused this big bag of fuckery:

A male voice came over the public-address system Sunday evening at a store in Washington Township, in southern New Jersey, and calmly announced: “Attention, Walmart customers: All black people, leave the store now.”

Now.  I realize that there are a lot of problems with that.  I understand that the guy was probably making a joke.  I say probably because while the possibility exists that he wasn’t, he also didn’t follow up with subsequent announcements such as:  “Seriously, go,” or “I mean you, too, black guy looking at brands of orange juice.”  No.  The guy was not funny, but he also was not serious.

Should he get fired?  Sure.  Should people be all mad at Wal*Mart?  Why?  Do you think they need to have a question on their application?  WILL YOU TELL BLACK PEOPLE TO LEAVE STORE? YES/NO.  That would be funny, too.  But it’s not gonna happen. Anyway, it may have been, according to the article, a “rogue patron.”

“I want to know why such statements are being made, because it flies in the face of what we teach our children about tolerance for all,” said Sheila Ellington, who was in the store at the time with a friend. “If this was meant to be a prank, there’s only one person laughing, and it’s not either one of us.”

And that’s the weird part, the part I keep thinking about.

I mean, if the guy was joking, who gives a shit who thought it was funny?  I mean, he should not have used the Wal*Mart loudspeaker.  And, if he is an employee,  he should get fired.  But beyond that, what if it was some dude without a PA?  What if it was just a dude yelling?  What if he said fat people instead of black people?

Well, if he said fat people, nobody would care.  You only get in trouble for making fun of things that people can’t help.  And everyone figures big fat people must LOVE being fat.  Or else they are so lazy they let themselves be that fat.  Or they are just big fatsos so who cares if they cry!  At any rate, the point is that the context of the stupid Wal*Mart announcement is a bad joke.  Not any more or less than that.  So there need be no ruckus.  If you do not apply context, then Jews should be calling for the banning of Hansel and Gretel.  The witch tried to put the kids in an oven, you know.

I don’t know how pissed I would be about this if I were black.  If I were in the store and someone had said for the white people to leave, I would have been all like, “WTF, white people don’t care when you make fun of them!”  Wait.  I guess that is the point.  The right to be pissed off about something is equal to the right of people to be offensive.  So who cares who is mad?  Not me.  I believe in America again.  We are free to be unfunny jerks, the principle upon which this website is based.