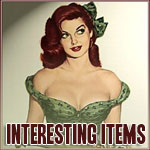 If you want to impress people at parties you need to have some interesting facts to spread around.  Nobody really cares about your “craft beer” or how you take pictures in black and white.  That will put everyone to sleep almost immediately.

But never fear.  I’ve been digging around to look for some things that you can throw out in a conversation that will at the very least steer it into a territory you are more comfortable with. Say for instance that people are talking about the Middle East.  You don’t know from Syria and any mention of Israel will start a fist fight.  What do you do?

You say:  “Hey, speaking of the Middle East, did you know the favorite pizza topping in Pakistan is curry?”

Then everyone will be all interested and you can say: “Yep.  Curry.  Not in India, though.  They like pickled ginger and minced mutton.”  Then you can branch off in all kinds of directions and the terrible political topic is forgotten.  And in case you need a couple more you can say that in Brazil they like green peas and in Costa Rica they put coconut on their pizza.

And then you can make some kind of joke where they put coconut on their pizza because there is nothing else in Costa Rica to put on them (except parrots).  Then you can explain how you aren’t really racist.  Either way, you aren’t trying to figure out where Syria is!