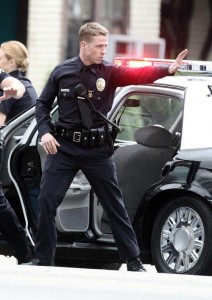 NBC renewed the cop drama Southland. I’m a bit surprised by this move. But, then when I saw that they were moving it to Friday nights, I was less surprised. It must have gotten decent reviews, but weak ratings.

So, why not move it to Fridays and see if it can scratch out an audience ala Friday Night Lights?

I thought the first season (well, first seven episodes) was a solid run. One of the things that I felt they did well was building a show where you were OK if a couple characters went missing in an episode. The show didn’t rely on any one character.

Dealing with the witness thing in a storyline that arced over several episodes and involved pretty much everyone in the show was something that was done well. TV hasn’t really dealt with the issue of witnesses, or lack thereof, which is a huge problem for prosecutions in large cities.

The other thing they did well was blending uniforms and detectives. Most shows are terrible in that regard. The best at it was The Shield…and the way they handled it was creating a fictional police station, which was a somewhat lame solution. Southland actually manages it within a more realistic context.

Still, going to Friday nights would seem to be a problem as most shows move to that night to die unless they are REALLY FUCKING GOOD. I’m not quite sure the show is on that level.