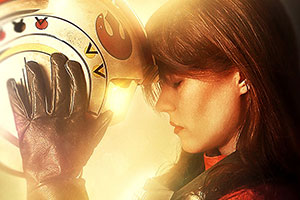 The Rogue One: A Star Wars Story trailer was released Thursday morning. As someone who hasn’t gotten very excited for the last four Star Wars movies, I went into this trailer with very low expectations. But, I mean, this looks like it could be a genuinely decent movie and not just a decent movie for a Star Wars nostalgia trip.

It’s hard not to start with Mendelsohn and Whitaker, despite Mendelsohn getting like only two seconds in the trailer and he’s just standing there.

But, it’s also a reminder that this movie actually has two really good actors! Which is not something that can be said about previous Star Wars episodes. Mendelsohn and Whitaker are each better at this craft than any single other actor in the 7 previous Star Wars movies. And, it’s not even close, or really, I doubt it’s even up for debate. They got great actors for a change.

Mendelsohn is the best actor we have right at this very second, and he’s doing a Star Wars movie. That seems a bit ridiculous on the surface, but, I mean, if it allows him to keep pumping out more episodes of Bloodline, that’s a good thing!

Vader is in this trailer. Maybe. Possibly. He was around at the time of the events this film will take place in, so, it would make sense for Vader to have some capacity.

DO I NEED TO SAY MORE ABOUT VADER?
no

3. Simple Story
The best part about this film appears to be that the plot seems straight forward. Young Woman with a criminal record plots to steal Death Star goods and what will she become? Good or evil? The closing shot is of the main character now in what appears to be Empire gear.

Misdirection? Could be. Of course, afterall, the plot is to steal Empire blueprints. But, at least there isn’t the drama of the other films that’s all, “hey, I wonder if she’s cousins to so and so” or, “who is her father?” or, “wow, is she really considering hooking up with Chewbacca right now?”

Simple story is good, for a Star Wars flick. When they try to get all convoluted, it can be really dumb. Force Awakens suffers from this to some degree. Not that Force Awakens was confusing. It was the opposite of that. Everything was kind of telegraphed and spoon fed to the viewer. Just put good actors into situations where they can be good.

It’s kind of refreshing to see some sword play that doesn’t consist of light sabres, right? It might be a stick. I don’t know. Maybe someone who has broken down the trailer a little more in depth can chime in there. But, damn, those shots towards the end of the trailer, after they show menacing Mendelsohn are pretty delightful. Those big things (AT-ATs?) the Empire has that are blasting shit on the beach? That was cool as well.

All of the action shots looked like such a nice change of pace from other Star Wars movies. Maybe it just looks better because it’s different? I don’t know, but, it’s more to look forward to I think than what you got out the Force Awakens trailer.

As in, as you remember the Death Star to be. Obviously this makes sense, but, making sense hasn’t always suited Star Wars. One of the first things the prequels tried to do was introduce newer, cooler weapons. But, you’re going back in time. So, that seems dumb, right? Why have a double sided light sabre and then NEVER have that again? Made no sense. Keeping the Death Star as the 1977 version and not trying to doll up the look even a little is the best decision they could have made.

All in all, this looks like a trailer for a movie that could actually be good. Which is a different feeling than I have left any other recent Star Wars trailers with.